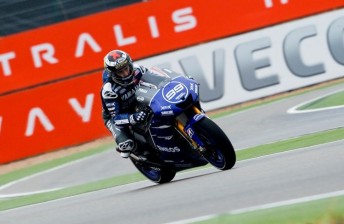 Jorge Lorenzo will start Sunday’s Aragon Grand Prix from pole position after narrowly edging out archrival and countryman Dani Pedrosa in the final moments of qualifying.

Both riders improved their fastest times in the closing stages of the 60 minute session, with Lorenzo’s 1:49.40s best proving 0.09s quicker than Pedrosa.

Pedrosa’s effort had been particularly commendable after the Honda rider had suffered an early fall while the field tasted dry conditions for the first time all weekend.

Cal Crutchlow spent much of the session atop the time sheets, but would wind up just third despite also improving late in the going.

Both factory Ducati riders endured falls during the 60 minutes, with Rossi forced onto his spare bike before setting the eighth fastest time.