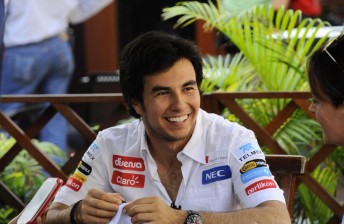 McLaren has preempted Mercedes’ announcement that it has poached Lewis Hamilton for the 2013 season by confirming Sergio Perez as his replacement.

The Mexican will join Jenson Button at the Woking-based squad next season, which will serve as his third year in Grand Prix racing.

The team has cited the three podiums that Perez has achieved with Sauber so far this year, in addition to his fastest lap in the Monaco Grand Prix, as proof of the 22-year-old’s credentials as a future star.

Perez, who entered Formula 1 last year with the backing of Mexican billionaire Carlos Slim, says it will be an honour to drive for McLaren.

“I’m thrilled and delighted to have become a Vodafone McLaren Mercedes driver,” he said in a statement.

“The McLaren name is one of the greatest in the history of Formula One. For more than 40 years McLaren has been a team that every racing driver has aspired to drive for – I was brought up on the great stories of Ayrton Senna’s many world championship triumphs for McLaren – and I’m truly honoured that they’ve chosen me to partner Jenson from 2013.

“I’ve spent the 2012 season working very hard to demonstrate my potential, but I’ve always remained humble and focused. I am, and always will be, extremely grateful to Peter (Sauber) and everybody at the Sauber Formula One team for their belief in me, and for giving me the chance to race in Formula One.

“In fact, they gave me the perfect opportunity to demonstrate what I can do – and I’m now equally grateful to (team principal) Martin (Whitmarsh) and everyone at Vodafone McLaren Mercedes for giving me the chance to take this next very big step in my career.”

Added Whitmarsh on behalf of McLaren: “Uniting Sergio alongside Jenson will give us a very broad base of driver ability. Jenson is one of motorsport’s greatest ambassadors, and his unique blend of prodigious speed and canny race-craft makes him formidably well-armed to fight for victory on any Grand Prix circuit in the world. While Sergio is still developing his palette of skills, we’re convinced that he’s not only talented and quick, but also that he’s willing and eager to learn.

“He’s perfectly poised to develop into a world championship challenger. His addition to the Vodafone McLaren Mercedes team provides us with the perfect two-pronged driver line-up for the new season.”