Howard Revell at a Grafton vintage speedway meet in 2012

A quick gaze back through the record books soon reveals a reference to Howard Revell referring to him as “The Marathon Man”.

Revell literally was the Robert de Castella of speedway with an amazing four 100-lap victories and twice runner-up in these marathons.

The term champion fitted quite snugly beside Revell’s name.

His career was spread across dirt, ashpalt and clay with wins stretching from the Ekka in Brisbane, to Claremont in Perth, Rowley Park in Adelaide, Canberra, Westmead and Liverpool in Sydney and Avalon and Redline in Victoria. 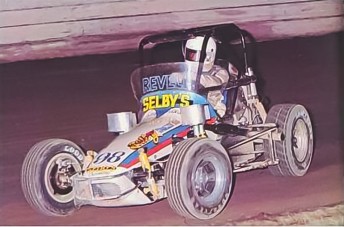 Then when the Sydney speedcar club parted ways with the showgrounds and went to Liverpool in the late 1970’s Revell, Barry Pinchbeck and Ronald Mackay dominated on the D-shaped quarter-mile track with more than 100 feature race victories between them.

Revell’s career then branched out to the United States in 1978 when he finished 37th in USAC’s championship.

“I put my car on a plane and took my family to America and on arrival I went shopping for a motor home. I found a 20-foot Dodge Startreck for $7000 and I borrowed a trailer and went racing.”

“I was based in the Indianapolis area and we used to chuff off from there to various tracks around the US,” Revell begins.

“I did something like 10 meetings and ended up 37th in the season pointscore but I was disappointed in my performance because I knew at certain tracks you had no idea of what set-ups you should be running or the gearing.

“But when I revisited those tracks I was right on the money. It was an interesting period in my career because we were running on clay tracks, dirt tracks, pavement tracks, goat tracks and anything else you can think of.”

Revell would also travel to New Zealand several times and was captain of the Australian team which competed at Auckland’s Western Springs speedway.

“That is an exciting track and those Kiwis would race hard,” Revell said.

“Anyway they were having a Test match with the Americans and there were usually three drivers from each country for the teams racing. “In 1976 when I went over there Johnny Rutherford (the 1976 Indy 500 champion in a Drake/Offy McLaren) had been driving my car and I was driving the one he was supposed to drive.

“In the feature race Rutherford got involved in a bit of a bingle and that put him out of the race and I sort of got caught up in it too.

Rutherford also travelled to Australia and would often mix speedway with his glory days on the IndyCar USAC circuit.

The New Zealand experience co-incided with the time Rutherford also competed in Sydney where he was to run Don Mackay’s VW however the car had engine problems. Then it was decided that Rutherford hire Revell’s car in Sydney which is when it was also decided the American star would also run it at Western Springs.

“Rutherford’s times were slower than mine so we took the car to Liverpool with the aim of improving his times,” Revell recalled.

“After one and a half hours he was still complaining about a push that I could not adjust out. I suggested that I drive the car in order to locate the problem.”

“After a couple of laps of settling in I rolled off some quick laps then returned to the pits not being able to fault the car.”

“When I climbed out I was told that I was two-tenths of a second quicker than Rutherford’s best lap.

“Later that night Rutherford ran second to Garry Rush but I felt he should have won the race.”

The stories of that American sojourn are long and colourful but then Revell returned home and when the Canberra track was paved Revell found himself virtually unbeatable.

“At one stage I held every lap record bar one and that was held by Ronald Mackay.”

The last record of Revell in victory lane was in 1994, the year he in fact decided to retire from speedway which had enriched his life to a remarkable level.

Taking out the ACT title in Canberra early in the year was quite a fitting way to say goodbye.

He recently restored his old VW which he ran at a vintage meeting at Grafton earlier this year. It is the first time it had been run for quite a few years.

In the scheme of speedway history that VW holds plenty of significance.

“It’s the only one I still own,” Revell says. “When you read its cheat sheet you get an idea of what its history is. It would be up over a thousand races if you start counting all the heats.”

Life for Revell now is a lot slower than his 30 years of competitive speedway driving where he was dicing with many of the sport’s superstars and dodging death which was a lingering threat.

“Today I’m selling socks and belts at the markets. We trip around between Kingscliffe and Brunswick Heads in northern NSW and every Sunday we are over at Manly in Brisbane.

“It keeps me out of mischief but I work two days and have a five-day weekend.”