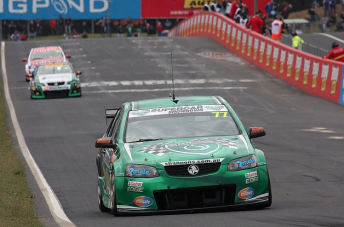 Grant Denyer has confirmed that he will not compete in the Supercheap Auto Bathurst 1000 this year.

The Seven Network personality was slated to drive in the Shannons Supercar Showdown entry in next week’s race, however, a niggling shoulder injury will keep him out of the car.

As reported by Speedcafe.com this morning, Cameron Waters will step into the #23 Commodore, to drive alongside the winner of the reality TV program.

The winner will be announced this Sunday (1pm AEST on 7mate), with Jesse Dixon, Glen Wood and Kiwi Andre Heimgartner all remaining with a chance to win the conveted drive.

Denyer is gutted that he will miss out on his return to V8 Supercars.

“I haven’t been able to sit in a V8 Supercar, let alone test this year,” Denyer said.

“Bathurst is the one place where you simply can’t be under prepared physically or mentally.

“While I am disappointed, until I can start training and regain my core strength, this is the only decision that is fair for the team.

“Rick and Todd have been great to work with and very understanding, and while I will certainly miss being on the grid at such a special event, this will give the team the best chance of a great result.”

Waters was the inaugural Shannons Supercar Showdown winner, but was forced out of contention early in his first stint when he collected the Forrests Elbow wall.

He has competed for Kelly Racing-prepared Dreamtime Racing team in the Dunlop Series this year and currently sits 19th in the title chase.