CLICK HERE for more on the livery unveiled this morning

SPEEDCAFE: Dick, this livery is something that will naturally stir plenty of emotions in Dick Johnson Racing fans. For you, it must be a proud moment to have a brand like Norton want to be a part of something like this?

DICK JOHNSON: Absolutely. It’s certainly something different, and something that fits in well with the 50th year of Bathurst celebrations. As you know, I’ve had a lot of highs and lows at Bathurst over the years. Tru-Blu really reflects that, and is a car that a lot of people remember. So for me it is very special.

SPEEDCAFE: There are so many iconic colours for DJR at Bathurst – greens, reds, yellows, as well as blues. Was Tru-Blu your personal favourite?

JOHNSON: Well it certainly was the one that set us on the road to a good career. It was very noticeable and had a very catchy theme on the side of it with the Tru-Blu brand. I think most people caught onto the phrase as much as the colour, and I know for a fact that it put Palmer Tube Mills on the map. SPEEDCAFE: It was part of a great era for you and Ross Palmer (founder of Palmer Tube Mills). Do you still keep in contact with him?

JOHNSON: I haven’t spoken to him for a little while, but I have seen him in recent times. He’s had a few health issues, but he’s a man that was very instrumental in the early days of the team with the catchy phrasing of Tru-Blu, Red Roo and then Greens-Tuf. He obviously did very well out of it before he eventually sold the business off.

SPEEDCAFE: As you say, this livery is part of the 50th year celebrations that V8 Supercars is running this year. Have you enjoyed being a part of what they’ve done so far, and have you been impressed by how they’ve gone about it?

JOHNSON: They’ve certainly made a big thing out of it and I think that it’s really going to pay dividends. Many people don’t know that it’s the 50th year of the Bathurst race, and I think that it’s going to be a huge event for many reasons. It’s always a great race to go and win, but it’s great to see some of the old traditions coming back again. Some of the younger fans probably don’t realise how much appreciation there is for these older cars.

SPEEDCAFE: I know you’re always wary of accruing a sore neck from doing such things, but in moments like this do you look back on how far the category has come? 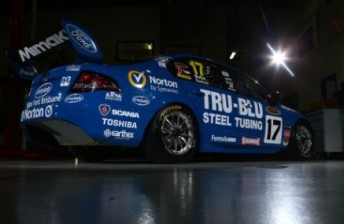 The Tru-Blu livery to be run at Bathurst this year

JOHNSON: I’m just proud to be someone who was one of the founding members of the place. Between myself, Freddy Gibson and also, to a point, Larry Perkins, we really set the whole thing in motion. To see how it’s been built up by the likes of Tony Cochrane and company to what it is today, it’s certainly an amazing thing.

I would suggest also that one of the major players at that point in time was Wayne Cattach, who worked to put the whole thing together and understood not only the AVESCO side but also the team aspect, because he worked for me for nine years.

SPEEDCAFE: The guys you mention there have all either moved out of the game or are currently preparing to step away. Do you still enjoy being involved and going to the race track?

JOHNSON: I sort of do and don’t. I do when we have results, because that’s what I go there for. They certainly haven’t been what I’ve hoped for recently.

SPEEDCAFE: It has been a tough year for DJR, but if any one thing can turn a season around, it’s a result at Bathurst. Are there any expectations or hopes for the race?

JOHNSON: The expectation is that we’ll go there and be competitive, and the hope is that we come away with a result. It sounds simple to say it like that, but we’ll just have to get up there and see what we can do.