One of several retro-themed cars expected to take part, the colours were unveiled at a launch in Dick Johnson Racing’s Stapylton, Queensland, workshop this morning.

The livery combines period Tru-Blu Steel Tubing signage with that of Norton and other sponsors usually seen on James Moffat’s #18 entry. The deal will see James Moffat and Alex Davison run the #17 for the event.

CLICK HERE for a full gallery of images from the launch

The livery pays tribute to two cars that were instrumental in building Dick Johnsons’ legend.

Johnson shot to prominence in 1980 when he led the early stages of the Bathurst 1000 in his Tru-Blu supported Ford Falcon XD until colliding with a rock that had fallen onto the circuit at the exit of The Cutting.

A subsequent outpouring of emotion on the live television broadcast by Johnson saw fans donate money to the laconic Queenslander, who promptly built a replacement car, with which he won the 1981 Australian Touring Car Championship and Bathurst 1000. 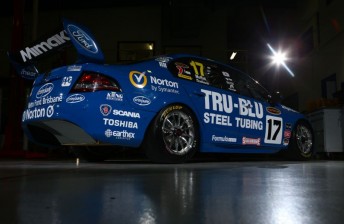 Moffat and Davison will run #17 for the event

“The car is definitely going to get fans around the world excited,” said Johnson of the livery.

“Norton has done a great job incorporating the historic with the new and  I can’t wait to get there (to Bathurst) and see it racing.”

CLICK HERE for Speedcafe.com’s interview with Dick Johnson on the legend of Tru-Blu

“Norton is excited to contribute to the celebrations by honouring an iconic livery in Australian motorsport history, bringing back to life Dick Johnson’s Tru-Blu livery on the modern day Team Norton DJR car,” she said.

“We are proud to be a sponsor of V8 Supercars and delighted to be able to share this commemorative livery with motorsport fans.”

DJR’s three other entries of Dean Fiore/Matthew Halliday, Steven Johnson/Allan Simonsen and Steve Owen/Paul Morris will all compete at Bathurst in their regular colours.

Ironically, the number switch involved in the arrangement will mean that a Johnson is not behind the wheel of a #17 Ford at Bathurst for just the second time since 1977.