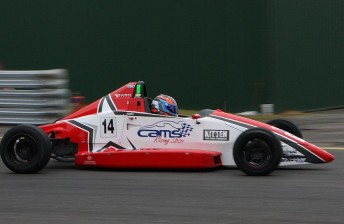 Macauley Jones in action at Sandown

Macauley Jones says he’ll be leaning on the advice of his multiple Bathurst 1000 podium finishing father Brad Jones when he tackles his first race at the daunting Mount Panorama circuit early next month.

The October 6-9 Supercheap Auto Bathurst 1000 weekend will mark the first time that an AFFC round has been held at Bathurst since 1995 – the year that current Brad Jones Racing V8 Supercars star Jason Bright secured the open-wheel title.

“I’m excited (about going to Bathurst), I’m really going to lean on the knowledge of the drivers in the V8 team in the lead up to the weekend,” said Jones of the weekend.

“Obviously I’ve been talking to dad a lot too, he has an awful lot of experience around there; it’s his best and favourite circuit.

“Last year I worked with the V8 team, and I’ve been to the last five Bathurst 1000s. I definitely have a feeling for which way the track goes, I’ve gathered a lot of knowledge about the place without ever racing there before.”

Also among the field at Bathurst will be Liam Sager, who returns to the championship with Evans Motorsport following four rounds on the sidelines.

Sager is one of a handful of drivers to have Bathurst experience after competing in the Kent races at this year’s Bathurst Motor Festival, and says he’s expecting strong results.

“To be able to get back into a championship class car and to race at Bathurst again is fantastic,” he said.

“I’ll be giving it everything to bring home a race win for the team, I don’t have to worry about championship points so I’ll be going all out for a win.”

See below for the full Bathurst Formula Ford entry list