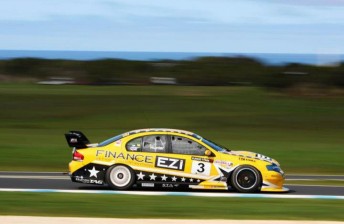 Ford driver Josh Hunter will take a 40 point lead into the final round of the Kumho V8 Touring Car Series after scoring three wins from three starts at Phillip Island.

The second encounter proved costly for erstwhile points leader Jim Pollicina, who spun of the circuit while running third with three laps remaining and became stranded on the wet grass.

The McDonalds Holden recovered to score second in the final ahead of Evangelou, Hansen and Haber.

Evangelou’s position came despite an early touch from Morgan Haber that sent the ex-Ford Performance Racing Falcon into a spin.

Haber, who had scored his third consecutive pole position on Saturday, was handed a drive-through penalty for the collision.

The 2012 Kumho V8 Touring Car Series will conclude at Sandown on the November 24-25 weekend.