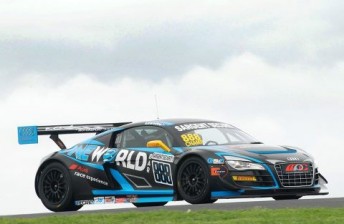 Craig Lowndes has won on debut in the Australian GT Championship, taking out the first of two 60 minute races as part of the Shannons Nationals at Phillip Island.

The Melbourne Performance Centre Audi-mounted Lowndes battled with the two Erebus Racing Mercedes SLSs of Maro Engel and Peter Hackett throughout the race, taking the lead from the German in the compulsory pit stop.

Emerging with a five second advantage, the TeamVodafone star saw Engel whittle the lead down to as low as one second before pulling away to take the chequered flag 2.7s ahead.

The Nick O’Halloran/Allan Simonsen Ferrari came home eighth after the Dane was served a drive-through penalty for jumping the start, while the sister Maranello entry of Peter Edwards/John Bowe lasted just 10 laps before retiring with mechanical issues.

A second 60 minute race will conclude the round tomorrow.

Already crowned champion James Winslow had taken the chequered flag first after passing Gilmour at a Safety Car restart, but was later handed a 28 second post-race penalty for having overlapped at the control line during the move.

In the Kumho V8 Touring Car Series Josh Hunter closed up the points standings by winning the opening race of the weekend.

Having qualified fourth despite suffering mechanical issues during the session, the Ford driver slowly picked off his rivals to move into the lead.

Tony Evangelou finished the race in second while pole-sitter Morgan Haber failed to finish after spearing off at Turn 1.

Rounding out the day’s action, Gavin Ross secured pole position for the first of the Saloon Car encounters tomorrow.