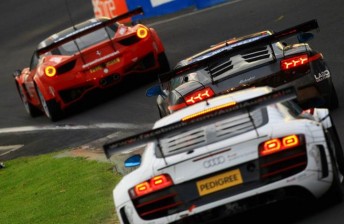 The opening hour of the Bathurst 12 Hour will count for points towards the Australian GT Championship next year as part of an unusual deal confirmed today.

The two parties released separate statements this afternoon confirming the arrangement, which will see AGTC competitors not wishing to complete the full race retreat into pit lane after the first hour of running.

Qualifying for the 12 Hour will see the grid set by the fastest time set by each vehicle, scrapping the aggregate system used in recent years, while the AGTC competitors will only be allowed to compete in two of the three 12 Hour practice sessions and one of the two nominated qualifying sessions.

“The net result is this scenario provides Australian GT Championship competitors the first round of their national championship at Bathurst, without disadvantaging those entrants who do not wish or are not able to do the full 12 hour enduro,” said Bathurst 12 Hour promoter, James O’Brien, of the deal.

“Those that do contest the full race will not only score points towards the AGT Championship, as well as having a chance to win the Enduro, but will also not incur the cost of an additional event as Bathurst will double up as the first round of the AGT Championship.”

AGTC manager Ken Collier emphasised that the category’s adoption of the Balance of Performance system used in the Blancpain Endurance Series for next year has made the deal possible.

“It was important for the championship to have a presence at Bathurst in 2013 and this was a perfect way to achieve that,” he said.

“The Balance of Performance is a match, the drivers match, the teams match and we cannot see any negatives out of this partnership.

“It was important for everyone involved that we find a way to have Australian GT and the 12 Hour work together for the betterment of GT racing in this country as a whole, and that’s what we are doing: It works for everyone.”

While it has been confirmed that there will be no compulsory pit stop under the format, not all GT3 vehicles will be able to complete a full hour of flat-out running on a tank of fuel based on the consumption seen in this year’s Bathurst race.