Howard Revell’s life wouldn’t have been worth living if he didn’t live up to the trail blazed by his illustrious father.

Ray Revell was regarded as Australia’s greatest midget speedway racer so Howard was stepping into the ‘land of the giants’ in terms of his shoe size.

With the very real possibility of failing the family name, Howard proceeded to pursue a dirt track career after purchasing a 1955 FJ Holden stock rod and hitting the Westmead Speedway in Sydney in 1963.

Revell had purchased the FJ from Nick Collier without an engine.

So Revell bolted in the engine he had built that had 12-1 Wesco pistons, the cylinder head had larger valves and were ported to suit his homemade manifolds.

There were three Schebler carburettors on the other end of the manifolds.

The first mistake Revell made was that he ran the engine on methanol so he became a dab hand at changing pistons.

“It was costing me money. I was entitled to toss it in there and then but for some reason I didn’t,” Revell said. Howard Revell at Westmead in July, 1965

Then Revell managed to get away with running an illegal entry, quickly devising that there would be no officials from the Stock Rod Club there at Westmead. The car was not exactly legal spec with the wheelbase shortened by four inches.

Later Revell went on to race Speedcars which over the years he would master with a fair level of perfection and over a three-decade span.

Getting there was half the fun.

“Unbeknown to me Johnny Peters had been persuading my dad to let me drive John’s Repco Holden,” Howard recalls of the early 1960’s.

“Dad had lost a few mates in racing accidents and he didn’t really want me to race. 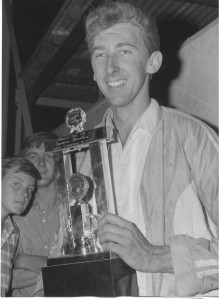 “Eventually he gave in and let me drive. Then the big day came and it was a five-lap heat race and boy was it great.

“I thought I was flying even though John Alexander lapped me. After the race (remembering my inexperience with Speedcars) I said to Johnny Peters ‘there was something hitting the underside of the seat’. Then he told me that was because ‘I was going so slow that the diff was kicking back and hitting the seat.”

Then Revell had trouble mastering the super quick steering. Three-quarters of a turn lock-to-lock is what he needed to get his head around.

“But then I went on to win the 1964 B-grade point score and the prize was a Hi Fi sound system from an electrical firm in Sydney.

“When I went to collect the stereo they said they didn’t know anything about it and I showed the manager a programme that contained the list of the prizes. (but) after a lot of talking I was the proud owner of a transistor radio.”

There was the time Ted Dark offered him the drive of the BERCO Holdens for 30 per cent of the prizemoney so Revell thought it was Christmas because if the truth be known he would have driven it for nicks. 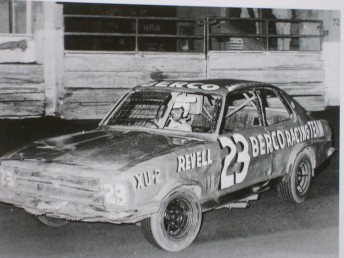 What he didn’t know was that Dark had trouble keeping his drivers before Revell came on the scene so Revell quickly found himself in a solicitor’s office staring at a three-year contract forbidding him to drive for any other Offy team owner.

By 1968 Revell was in pursuit of the Craven Mild Championship.

“From Rowley Park (Adelaide) we headed across a bull dust road called the Nullarbor Plains that took us to Perth.”

It was a fruitful experience with Revell winning that round and setting a race record that stood for close to 10 years.

Revell remembers the days at the Sydney showground when an old driver from the 1950’s called Dallas James was the gatekeeper to the pits.

“He had done a bit of boxing and four big thugs tried to get into the pits one time and when he found they didn’t have any passes he dropped two of them and the other two took off like a Bondi tram.”

There were times when Revell dabbled in a bit of circuit racing like 1969 when he purchased a Formula Vee and ran it at Warwick Farm, Oran Park, Amaroo Park, Hume Weir and Bathurst.

In 1970 Revell would end up buying Brian Cunneen’s Offenhauser for $5000 but it had been stripped and it would not be until the following year when Revell moved to Canberra that he managed to put the Offy back together again.

“I won quite a few races with the Offy,” Revell said.

Then in the mid 1970’s Revell went into the BERCO Holden, enjoying plenty of success including three wins in 100-lap races. In fact he managed to win a Ford Falcon XR for his deeds winning one of those events.

“It was a big deal. That Falcon was worth about $6000 and it remains one of my fondest memories along with winning the memorial race named after my dad in 1976 at Liverpool.”

“Dad won a lot of Championships. Back in his prime he would race in Sydney one weekend and then go to Brisbane the next and be back home in Sydney the weekend after that.

“If you think about it the roads back then and the cars that they were driving with headlights where you could barely see the front bumper it was amazing.”

Among those rivals who stand out during Howard Revell’s career were Johnny Stewart.

“In our feature races at the Sydney Showground there were 19 to 20 starters and any one of those guys could have won on any night.

“The main half of the field was filled with Stewart, Lee Marshall, Peter Kinnan, George Tatnell, Peter Bowland and there were so many good drivers and the equipment was so equal.

“The VW compared to the Offy was a completely different car to drive. It was so much lighter in the front and it turned better.

NEXT WEEK: Part two of Speedcafe’s feature documenting Howard Revell continues when his colourful career crossed paths with American legend Johnny Rutherford and we reveal his surprising change of pace these days.