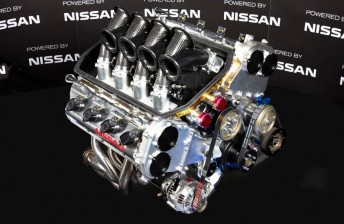 The Nissan V8 Supercar engine at its launch earlier this month

A day after the announcement that it will not be the only brand joining the V8 Supercars grid in 2013, Nissan’s Car of the Future project has reached another key milestone with its engine firing into life for the first time.

Officially launched to media earlier this month, the V8 Supercars version of Nissan’s aluminium, quad-cam, VK56DE unit has been a work-in-progress since being selected to power the company’s campaign in February.

Unlike the Mercedes V8 Supercar engine program revealed yesterday, which will see AMG Customer Sports design, build and maintain the engines for the Erebus-SBR outfit in Germany, Kelly Racing has been developing its own engine specification in-house.

The Nissan unit was started for the first time inside the team’s existing engine shop in Moorabbin, Melbourne, early this morning. Kelly Racing co-owner and driver Todd Kelly told Speedcafe.com that it was a proud moment.

“There was a little bit of emotion involved for us as it’s been a pretty long, hard road to get it built in the time frame,” he said of the initial start-up.

“There weren’t any tears or anything like that, though. We just all shook hands, said well done and then continued on.

“Today is really about running it in, setting oil pressures, starting to map the fuel injectors and things like that,” he added.

“If everything goes to plan then late this afternoon we’ll actually be able to lean on it and see what it makes.”

Although the squad now has all of the pieces necessary to complete the engine department in its main Braeside facility, a desire to undertake initial running with a dyno cell it knows well and the precious nature of labour time mean that the new shop won’t be completed until late this year.

The team plans to have 14 engines complete by the 2013 season opener, with the initial build program consisting of two powerplants.

“The plan is to get this first engine up and running and get a pretty good idea of where the horsepower is, but then not spend a massive amount of R&D (research and development) time on it,” explained Kelly.

“In a week or so it’ll come off the dyno and into our aero test car to get plumbed up and ready for its shakedown.

“In the meantime we’ll go about building our second engine, which will go and do a lot more of the dyno testing. The second engine will be the one that we send up to (V8 Supercars in) Queensland.”

It is expected that Kelly Racing’s first Altima race car will complete an initial shakedown in late October before V8 Supercars begins its open-air aerodynamic equivalency testing against the Holde and Ford COTF offerings. It was confirmed yesterday that the first Mercedes is unlikely to hit the track until the middle of January.

The engine not used in the Nissan test car will be completely stripped for homologation purposes by V8 Supercars, setting an array of technical parameters – including inlet port and camshaft sizing – for any four-valve, double-overhead cam engines that will run in the class in the future, such as the Mercedes.

Both Kelly Racing’s Nissan and Erebus-SBR’s Mercedes engines will share the same bore, stroke, compression ratio and rev limit as the current Ford and Holden powerplants, which carry over to the COTF in a largely unchanged form.