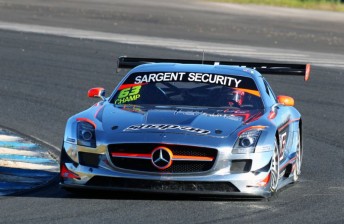 V8 Supercars will today announce that luxury German car maker Mercedes-Benz is set to join Holden, Ford and Nissan on its 2013 grid.

Owned by property tycoon Betty Klimenko, Erebus is understood to have been working on the deal with AMG since early this year.

Although Mercedes-Benz Australia previously made public its disapproval of such a program, it is expected that today’s announcement in Melbourne will come with the blessing of the marque’s local arm.

Its V8 Supercars entry is expected to be based on an updated Mercedes E-Class sedan, not scheduled to be unveiled until the Detroit Auto Show in January.

Current SBR sponsors IRWIN Tools and SP Tools and drivers Lee Holdsworth, Shane van Gisbergen and Tim Slade have already been locked in by the team for next year.

More details of the new program are set to be revealed at 1300 local time.