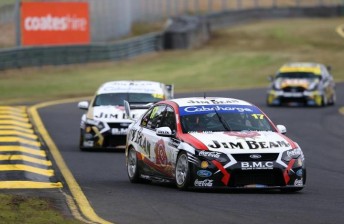 Long-time Ford hero Dick Johnson is hopeful that staying loyal to the Blue Oval will pay dividends with both the manufacturer and the fan base next season.

The V8 Supercars landscape is currently undergoing a fundamental shift thanks to the new-for-2013 Car of the Future regulations.

Existing Ford squad Stone Brothers Racing is set to announce today that it will race Mercedes bodied cars next season, adding to February’s announcement of a Kelly Racing-Nissan partnership.

SBR’s defection comes amid uncertainty over Ford’s commitment to the sport, with its flagship outfit Ford Performance Racing the only team currently guaranteed funding for next season.

Dick Johnson Racing has campaigned Fords in the ATCC/V8 Supercars Championship since the team’s inception in 1980, and will continue to do so next year.

“Right now I don’t know what it (SBR’s defection) is going to do for us to be quite honest, but one would hope it can only strengthen our overall position,” Johnson told Speedcafe.com.

“As far as we’re concerned we’re staying where we are, we don’t intend on jumping ship. We’ve been around this brand (Ford) for too long to be doing that.

“We’ve built a strong fan base around racing Ford products for the last four decades, and at this point in time we have no plans on changing that.”

Johnson however is quick to point out that he sees the prospect of Nissan and Mercedes joining the grid next season as a positive for the class.

“Quite frankly I do think that the arrival of new manufacturers is good for the category,” he said

“When you become so attached to something it’s hard for anyone to jump ship, but it is a business and other teams have made decisions that are right for them from a business point of view.”

While Johnson confirmed that negotiations with Ford continue over funding for next season continue, Speedcafe.com’s call to Ford Australia’s motorsport manager Graham Barrie is yet to be returned.