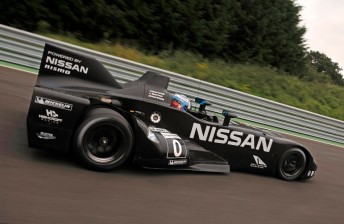 Featuring a 1.6 litre Nissan engine, the DeltaWing was designed to compete using half the fuel and half the tyres of its traditional sportscar competitors

The event will mark the car’s second competitive outing, having been the centre of attention as the ‘Garage 56’ entry in June’s Le Mans 24 Hours.

The DeltaWing has also been cleared by series organisers to complete a full campaign in the ALMS next year, as well as the merged ALMS/Grand-Am series that will begin in 2014.

Don Panoz, who in addition to being the founder of the ALMS is the managing partner of the DeltaWing project, says he hopes to complete a small production run of the cars utilising a new monocoque prior to the start of the season.

The DeltaWing failed to finish the Le Mans 24 Hours after being collected by one of the factory Toyotas early in the going.