PIRTEK POLL: Should primary drivers be allowed to pair up for the enduros?

PIRTEK POLL: Should primary drivers be allowed to pair up for the enduros? 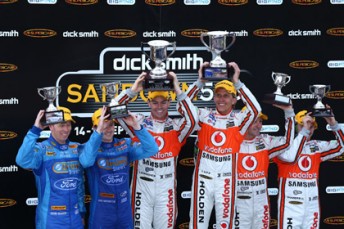 Should primary drivers be allowed to pair up for the V8 Supercars endurance races?

That’s the question being posed to Speedcafe.com readers this week as the countdown to the Supercheap Auto Bathurst 1000 continues.

For the 2010 V8 Supercars season, officials outlawed the pairing of its primary drivers, forbidding combinations like Craig Lowndes and Jamie Whincup driving the same car in the two-driver races.

Three years into the regulations, some V8 Supercars team owners are looking for the rule to be abolished, allowing each squad the freedom to chose its own endurance driver line-up.

Since the rule was introduced, five races have been held under the split regulations. TeamVodafone’s Craig Lowndes has won four of the races, paired with Mark Skaife (three wins) and Warren Luff (one). Holden Racing Team’s Garth Tander and rookie Nick Percat won last year’s Bathurst 1000.

So, what’s your take? Should teams have the freedom to pair up its aces for the V8 Supercars endurance races?