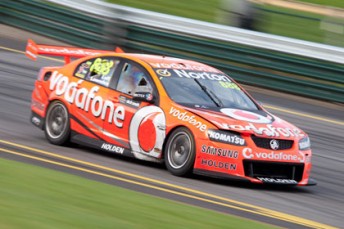 Craig Lowndes and Warren Luff have won the Sandown 500

Craig Lowndes and Warren Luff have combined to take victory in a fast-paced Dick Smith Sandown 500 in Melbourne.

Although Lowndes emerged from the third and final pitstops in excess of four seconds behind the leader, Lowndes stalked the #1 entry until Whincup made a mistake at Turn 2 with little over 20 laps remaining – allowing the lead change to take place.

Whincup eventually finished third after Mark Winterbottom took second from his grasp with just two laps from home in a move that saw the pair make door-to-door contact at Turn 9.

Whincup now enjoys a marginally reduced 32 point lead over Winterbottom in the championship standings, while Lowndes has overtaken Davison for third, a further 87 points adrift.

The Reynolds/Canto combination had been right in the lead battle until a slow brake pad change dropped the car from third to ninth at the final stops.

Championship contender Will Davison finished a lowly 17th after a difficult race from the back of the field. The Trading Post FPR squad elected to buck the trend by starting its primary driver – a strategy that was hurt by the appearance of the Safety Car early in co-driver John McIntyre’s second stint.

The Safety Car appeared just twice during the 161 lap journey. The full-course yellows were required six circuits in when Allan Simonsen caused a chain reaction that spun Tony D’Alberto into the Turn 9 gravel.

Taz Douglas knocked Steve Owen into the same gravel trap 75 laps later, triggering the second break in a race that would take the 2006 event’s record as the fastest Sandown 500 of all time.

Turn 9 was also the scene of an early spin from Greg Ritter that proved costly for the eventual 14th placed #34 Fujitsu Holden. Ritter led the opening eight corners of the race thanks to a fast start from fourth on the grid, but lost the place to Youlden before the end of the lap. The real disaster struck 14 laps later when the first of two spins dropped the car to the rear of the field.

Youlden led the first 30 laps before losing several places in the first pistop cycle, allowing Canto to take over the front-running.

The main focus during the two ‘co-driver’ stints however was on the charging Dumbrell, Luff and Richards, who all ended their double-stints in the top four despite starting just 19th, sixth and 15th respectively.

Meanwhile, a strong run for Alex Davison in James Moffat’s Norton Ford was thrown off course in the first stint when the team lost three laps clearing debris from the car’s throttle. A broken rear sway bar link would further hamper the duo’s efforts.

The Michael Patrizi/Jonny Reid Holden was the race’s only retirement. The West Australian was left to watch in disgust as a slow-to-restart Reid was punched into the Turn 12 exit wall by Bright as the mid-race Safety Car peeled away, causing significant damage to the Tekno Autosports entry.

The 2012 V8 Supercars Championship continues in early October with the Supercheap Auto Bathurst 1000.