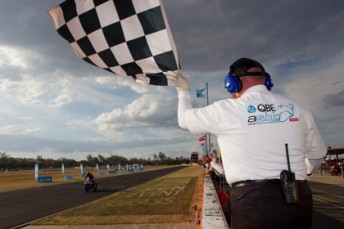 Josh Waters has clinched his second QBE Australian Superbike Championship with a measured and mature ride at Queensland Raceway today.

The 25-year-old Team Suzuki rider becomes just the sixth rider in the sport’s history to record multiple championship wins, both coming with Suzuki.

The Victorian rider was dominant early in the season, winning four races and making his mark with a string of consistent podiums.

He came to Queensland Raceway with a 19.5-point lead and chose to maintain the necessary advantage rather than attempt to race wheel-to-wheel with outright pacesetter and round winner Jamie Stauffer.

Waters finished this morning’s race in fourth and was a comfortable sixth this afternoon to seal the title by 13.5 points over Team Honda’s Wayne Maxwell.

The elation was evident for Waters who has not campaigned a full season since his rookie year in 2009.

“It’s just great to make it official, I can’t thank the team enough for everything they’ve done and preparing a bike that I love to ride,” said Waters.

“It’s not been my best track and I knew I would have to be careful, I couldn’t match it with Jamie (Stauffer) today but for me it was more about just getting two consistent race finishes.

“It’s a great feeling and good to win my second title as it’s only my second full season on the Superbike.

“Wayne (Maxwell) was massively competitive all year and he did a really good job to cut back my lead – he had some bad luck early on and if it weren’t for that then it would have been neck and neck today.”

“We’ve been up against it since the early DNF,” said Maxwell. “We’ve been able to make up a lot of ground but in the end Josh was just too consistent.

“The team was obviously very quick this weekend and I’m happy with the progress we made but it was more of a case of something having to go wrong with Josh rather than us having to win.

“It’s been a really strong season for Team Honda and the whole team can hold their heads up at the end of the day.”

Stauffer’s clean sweep this weekend saw him finish a clear third in the championship.

He added a new race lap record to his barn-storming run of results yesterday and said he couldn’t have asked for much more from the weekend.

“The bike has been good from Friday and been getting faster and faster each session,” said Stauffer.

“I seem to get my best results here and the conditions were good enough this weekend to be able to get out and run at the front.

“It’s a good finish to the season for myself and for Honda to get the 1-2.”

Stauffer has won 6 of the 8 races held at Queensland Raceway over the last two years.

Outgoing Superbike Champion Glenn Allerton was third overall for the round on the back of a strong second place this morning.

The Procon Maxima BMW rider rounds out the year in fourth place ahead of Suzuki’s Ben Attard, who was fifth.