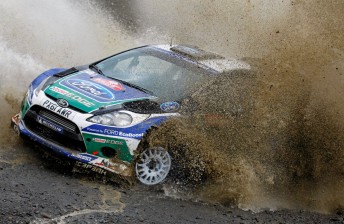 Jari-Matti Latvala on a charge in Wales

Jari-Matti has continued to dominate Wales Rally GB stretching his lead over Ford team-mate Petter Solberg to just under 25 seconds at the end of the second leg of the WRC event.

After winning all six speed tests on the opening day, the Ford duo won five of the seven special stages, with Latvala claiming three wins and Solberg topped the timesheets twice.

Competitors tackled two identical loops of three gravel speed tests in forests and on military land clustered around Llandovery in the Brecon Beacon Mountains. The day ended with a short asphalt test over utility roads at the Celtic Manor resort, host to golf’s Ryder Cup in 2010. The seven stages covered 95.36km.

“I had another superb day but I can’t afford to relax,” said Latvala. 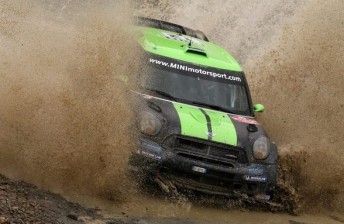 “If the weather turns bad tomorrow then the roads will be slippery and a 25 second lead can disappear easily in such conditions. I’ve always enjoyed this rally and perhaps it’s the event where the set-up of the car and my driving come together best.”

Australia’s Chris Atkinson maintained 11th place outright in the Italia Mini after a day where none of the leading contenders had any major issues.

“It was a pretty straight forward day regarding the set-up,” said Atkinson. 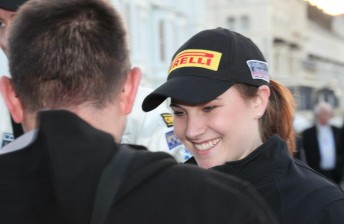 “We tried a few things regarding the balance of the car trying to get the sensation from the chassis that I’m looking for to try and pick up the pace a bit.”

Molly Taylor sits third in her class aboard a two-wheel drive Citroen after losing a place due to a puncture.

“We got the puncture and then the spare was actually the wrong directional tyre,” said Taylor. 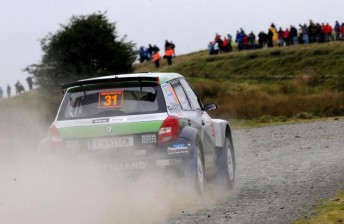 Hayden Paddon was back in action

“It cost us a little time, but apart from that we were pretty happy that the pace is there and we just need to be a little more consistent.

“Tomorrow’s stages are quicker, but there could be rain, so we need to make sure of no mistakes.”

Kiwi Hayden Paddon was back on the stages after retiring from the opening leg with electrical and gearbox issues.

Paddon won four of the day’s stages in the S2000 class aboard his Skoda Fabia.

“This is great seat time, as our time in the car has been fairly limited recently, so it is good to get some solid competitive miles under our belt.”

The final leg is the shortest of the weekend and covers tests close to the rally base in Cardiff with 83.10km of competition.