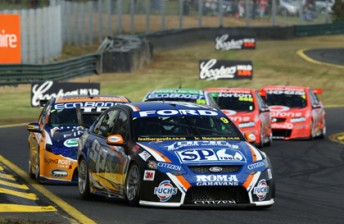 Co-driver Luke Youlden then led all 20 laps of Qualifying Race 1 before Van Gisbergen benefited from a mid-race Jamie Whincup mistake to secure the Sandown 500  pole in the second encounter.

The chaotic Qualifying Race 2 sees the four drivers that have monopolised the race wins so far this year – Craig Lowndes, Mark Winterbottom, Jamie Whincup and Will Davison – all starting outside the six tomorrow, providing the likes of Van Gisbergen with an opportunity for a breakthrough win.

“I think we’ve got a good chance to win,” said Van Gisbergen of tomorrow’s race.

“There were some fast cars that mucked up today… (but) it’s a long day tomorrow so we’ll see what we can do.

“The car was awesome (today), still doing low 10s at the end of the race,” he added.

“Yesterday we were really struggling, we were laughing how bad the car was. It was really bad.

“The guys have done a great job tuning it up and being on pole for tomorrow is awesome.

“We can get a good result with this car tomorrow. It’s a long race but I’m sure we can do it.”

The Armor All Pole Award is the second for Luke Youlden in 12 months after he combined with Will Davison to tame the qualifying race format at the 2011 L&H 500 Phillip Island.

With a mistake at last year’s Bathurst signalling the end of his lengthy tenure at Ford Performance Racing, Youlden says he was pleased to deliver for his new team today.

“I am very happy, especially after coming off a bad enduro last where at Bathurst I made a big mistake,” he said.

“I am really, really happy that (SBR co-owners) Ross and Jimmy (Stone) had faith in me and teamed me up with van Gisbergen.”

Although both Van Gisbergen and Youlden are credited with a pole position for their efforts today, victories in the qualifying races are not counted by V8 Supercars as official race wins.