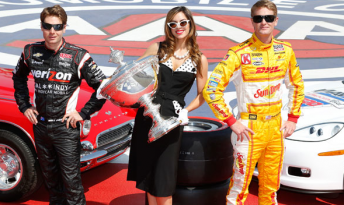 Australia’s Ryan Briscoe as topped the timesheets in opening practice for the title-deciding final round of the IZOD IndyCar Series at Auto Club Speedway, Fontana.

Ed Carpenter and defending champion Dario Franchitti separated Team Penske’s pair of Briscoe and Power in a session that featured a lengthy delay after Justin Wilson crashed at Turn 1, on the oval circuit.

The IndyCar series crown is there for the taking with 53 points up for grabs with Power leading Hunter-Reay by just 17 points going into the final race of the season.

Helio Castroneves and Scott Dixon are also mathematical chances to take the title, but will need Power and Hunter-Reay to strike trouble in order to snatch the IndyCar series crown.