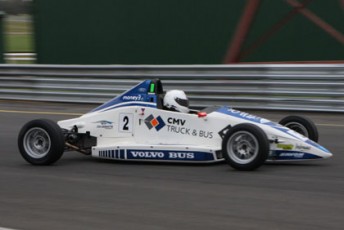 Practice for Australian Formula Ford, Touring Car Masters and Group A and C support categories have wrapped up their sessions at Sandown Raceway today.

The only notable incident of the session came when debutant Sam Breen endured an accident at the rise over fast back straight, bringing out the red flag.

Breen was uninjured and returned to the track for the second practice session.

Touring Car Masters saw Bowe pip Richards by just 0.04s in Practice 1 before Richards returned the favour in Practice 2 by the same margin.

Group A and C touring cars had their first of two practice sessions this morning. David Holc in his GIO Insurance Holden Commodore VL was fastest by 2.45s over Luke Ellery in his Nissan Skyline DR30.

The field edged closer to Holc in Practice 2, with Troy Stapleton in his Group A Holden Commodore VL lifting the bar to be 1.23s behind Holcs fastest time.

All support categories commence racing tomorrow with Group C and A Race 1 on track at 1105 (AEST) followed by Australian Formula Ford Race 1 at 1310 and Touring Car Masters Race 1 at 1530.