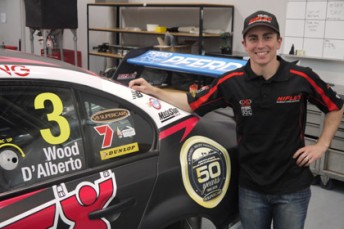 Tony D’Alberto and Dale Wood will campaign special ’50 Years of Bathurst’ decals on its Ford Falcon at Sandown this weekend.

V8 Supercars is planning a number of special initiatives over the Bathurst weekend to commemorate the occasion, with a number of teams also set to campaign ‘retro’ liveries to help push the 50 year message.

Team Hiflex has elected to run the branding on the rear of the car to help push what is already expected to be one of the most popular touring car meetings in recent years.

“The idea behind running the 50 Years of Bathurst stickers on our car is to pay our respect for what is a massive event in Australian sport,” D’Alberto said.

“We’ve had some good results at Bathurst in the past, and all of our team loves the history and tradition behind the race, so this is our way of honouring such a great event, and promoting it ahead of next month.

“Everyone at V8 Supercars is putting in a lot of effort to raise the awareness for what will be a historic occasion.”

The last time that D’Alberto and Wood drove together was at Bathurst last year, where the pair finished ninth overall.

The V8 Supercars hit the track for the first time at Sandown on Friday.