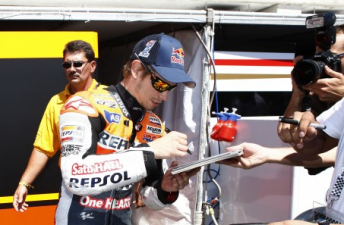 Casey Stoner will make a guest appearance at the Dick Smith Sandown 500 this weekend.

The two-time MotoGP champion will visit the outer-Melbourne circuit to visit friends in the V8 paddock while he continues his mid-season recovery from surgery that was undertaken on the ligaments in his ankle after his qualifying crash at Indianapolis.

Stoner announced his retirement from MotoGP in May, set to pull out of the sport at the end of this year. A return date to the Repsol Honda team for the remainder of this year has not been determined.

The Australian ace has been a guest of Triple Eight Race Engineering at V8 events in the past, and drove a T8-prepared V8 Supercar at Norwell at the end of last year.

Stoner confirmed that he will make a visit to Sandown this weekend.

“We’re going to take a trip to the V8 race in Sandown,” Stoner confirmed in his blog.

“It will be nice to get out of the house and catch up with our friends down there, so I’m really looking forward to that.”

With his recovery and rehabilitation continuing, Stoner says that his return to his bike is still unconfirmed.

“I have a check up on Thursday (tomorrow) but there is still no confirmation of when I’ll be able to return back on track,” he said.

“Like I’ve always said, I’ve got my own goals set for my return, but it just depends on the ankle and the recovery.

“The frustrating thing is that I feel I could have just kept racing but if I had crashed on it again, the damage could have been huge.

“Hopefully the recovery keeps going to plan and I’ll be back racing as soon as possible.”

Now 12 days since the operation on his ankle, Stoner said that his recovery at his family home in regional New South Wales was recovering well.

“I’m really pleased with how I feel,” he said.

“Dr Lam and all his team at the Sydney’s North Shore Private Hospital did a great job and made me feel totally relaxed and comfortable. I took the bandages off five days after the operation and the incisions are incredibly small and the swelling is gradually reducing day by day.

“The doctor said to start putting weight on it almost straight after the operation so I can keep the movement up for a faster return, but I have to be very careful with it.

“It’s nice to be back in Australia around family and friends at a time like this, everybody has been helping us out and it’s been much appreciated.”