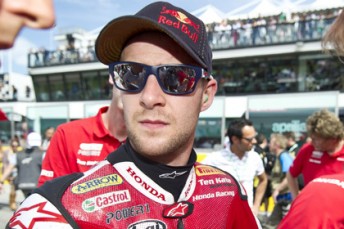 Jonathan Rea has described his upcoming MotoGP debut as a dream come true, after the Repsol Honda team confirmed that the Brit will replace the injured Casey Stoner in at least the next two races.

Rea will make his first start in the premier motorcycle class this weekend at Misano in Italy.

Rea has competed as a full-time World Superbike rider for the past four years and says that he wants to make the most of his chance in MotoGP.

“For me it’s a big dream come true just to race in MotoGP,” Rea said.

“It’s been very unfortunate for Casey to sustain such an injury when he was having a very strong season and my best wishes go to him while he recovers.

“Now, my job is to replace him and I will try to do the best I can.

“I love Misano, I’ve already raced there this year and I finished second, it’s also where I had my first ever Superbike win in 2009 and I enjoy the circuit and the Italian fans, they are always very enthusiastic.”

Rea has tested with the team over the past three days, and says that the Repsol Honda team has made him feel comfortable ahead of his first race in MotoGP.

“In the few days I’ve spent with the team I have felt very good, they understand it will take me some time to push with this bike but I’m learning every time I get on it,” he said.

“It’s been great to have these three days testing on the bike to prepare myself and for sure Friday morning will be less chaotic. We already have the riding position set, the base setup is set and I understand the electronics a little more. I know it’s going to be busy, but I’m ready.”

Stoner, who will retire from motorcycle racing at the end of the 2012 season, spoke recently of his recovery, stating that he believes his ankle will “never be the same.”