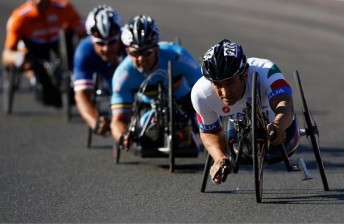 Just like he did in car racing, Zanardi leads the pack at Brands Hatch

The Italian, who lost his legs in a Champ Car crash in 2001, backed-up his victory in the men’s Individual H4 Time Trial on Wednesday CLICK HERE, won the 64km race in a sprint finish ahead of South Africa’s Ernst van Dyk, with Belgium’s Wim Decleir third.

Both victories came at the Brands Hatch motor racing circuit where the 45-year-old had also scored podium finishes during his motor racing career.

“To win this race in this way, in such a dramatic way and sprinting makes me really proud,” said Zanardi

“It shows that I am a complete cyclist, even if I have no legs. I just tried to save as much as I could during the race. I know I’m a good sprinter and just had to be confident in myself. And it worked.

“The race did not go as I expected. I thought that I could take off soon and that I would only need to stay calm, but at the fourth lap I tested my opponents and understood my tactic would not work, so I changed it completely and only tried to save, save and save.

“I used the uphills as rest, the others were overtaking me, then in the downhills I caught them up and regained my position.

“I managed my energies well. It’s been a tough race; I could have very well lost it.”

The former winner of the Gold Coast Indy will be back in action at Brand Hatch later tonight in the H1-4 Team Relay.