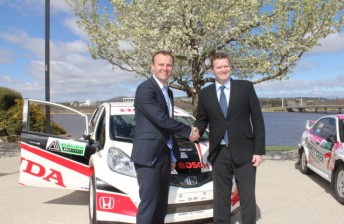 Australia’s National Capital will play host to the opening round of the 2013 Australian Rally Championship with an all new rally being announced in Canberra as part of the city’s Centenary celebrations in March.

The National Capital Rally to be held from 1-3 March will be part of a week-long celebration for Canberra’s 100th birthday and marks the return of the Australian Rally Championship to the ACT for the first time in five years.

The National Capital Rally was announced by ACT Minister for Tourism and Sport, Andrew Barr signalling the importance of the event as a part of the Centenary celebrations and as a major tourism drawcard for the city.

“I am delighted that the Australian Rally Championship is returning to the ACT. It will be a great chance for Canberrans to see Australia’s best teams in action in our own backyard,” said Minister Barr.

The announcement of Canberra back in the ARC comes as the sport heads into a two-wheel-drive championship and is garnering further support from manufacturers.

“Having the Territory government commit to the National Capital Rally as part of the Centenary celebrations comes at a time when the sport is attracting more manufacturer support and a brace of new generation rally cars are being introduced to the Championship adding significantly to the prestige of the ARC,” said CEO of the Australian Rally Championship, Scott Pedder.

“Canberra is a fantastic place to kick off the Championship and we are all looking forward to being back in the Brindabellas for an event that will be one of the highlights of the 2013 Series,” he added.

Leading Canberra based rally administrator, Adrian Dudok will be Clerk of Course for the 2013 National Capital Rally.

“Canberra has a rich rally heritage and is one of the few cities anywhere in the world that has access to top quality rally stages within 20 minutes of the centre of town,” said Adrian Dudok.

“Canberra was the first place in Australia to conduct a modern special stage rally with timing to the second and has played a major role in the development of the sport in this country.”

“The fact that Canberra has produced four Australian Rally Champions over the years despite having a relatively small population underlines the importance of the sport in the ACT.”

The rally is being organised and run by Canberra’s Brindabella Motor Sports Club with principal support from the ACT Government using rally roads in the famous Brindabella Mountains and in the Kowen Forest with a special twilight tarmac spectator stage in the Bluetts area on Friday 1st March.