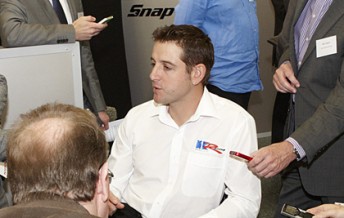 Kelly Racing owner/driver Todd Kelly says his team is not concerned by the prospect of starting the on-track phase of its Car of the Future testing program significantly later than its key rivals.

Although the Kelly-Nissan partnership presented its new engine package to media yesterday, the first two double-overhead cam, all-aluminium, units remain approximately two weeks away from beginning what is said to be a month-long durability testing period on the team’s dynamometers.

CLICK HERE for Speedcafe.com’s video of the engine launch

CLICK HERE for more on Nissan’s expectations heading into 2013

The team is also still working on refining the Altima body’s aerodynamic package such that minimal changes will need to be made once back-to-back track testing with its Ford Falcon FG and Holden Commodore VF-bodied rivals begins.

According to Kelly, his squad’s four-car layout will ensure that any lost ground can be regained before the start of the 2013 season.

“We’ve done a huge amount of testing already, albeit on a computer,” said Kelly in response to the potential consequences of a later start to its track testing.

“There’s still a few things that still need to be signed off from V8s – whether it be Ford, Holden or Nissan – to actually have an exact specification car that we’ll be racing next year too, so we don’t see that (a later start to track testing) as being an issue.

“Once we get our first car built, every two weeks after that we should be able to produce a car. That’s where we’ll gain an advantage. To have four Car of the Future Altimas running around at once, we’ll catch up without any dramas.

“By that point hopefully the other teams will have sorted any little bugs (with the basic COTF package) so we don’t have to go through those things as well.”

Kelly also stressed that recruiting a mix of American, English and French race engineers in the 2011-2012 off-season has hurt the team this year, but will pay dividends when testing the new car.

“The reason we did that (hire engineers without V8 Supercars experience) is that we really wanted to gear up and hit the track successfully next year.” said Kelly.

“A lot of the guys we got have worked on transaxle cars that are very similar to what the Car of the Future will be. We’ve made a short term sacrifice to our structure to make sure we hit the ground running next year.”

As previously reported, the development of the new car’s bodywork has largely centred around adding drag to the noticeably slippery Altima shape.

While the challenge has required the body to be raised slightly on the chassis from its natural position, Kelly says he’s expecting the final product to be well matched to the Falcons and Commodores.

“We’ve had to comply to all the minimum width dimensions that the Ford and the Holden do, so the actual glasshouse of the car is identical in dimensions to the current cars,” he explained.

“It’s really just the windscreen angles being so much flatter that will make drag an issue, but we’ve designed a lot of drag into the components such as the side skirts and the front bar while trying to achieve the same amount of downforce.”

The Altimas will run the same rear wing plane as their rivals, although the mounts and width of the wing package will be bespoke to the car, with the latter expected to be a key tuning tool during parity testing.

Kelly added that the road-going Altima body has not had to undergo any major alterations in order to fit the COTF platform, saving his team’s fabrication crew the task of cutting and rejoining the roof skins and rear doors, as it does currently with its 2012-specification Commodores.