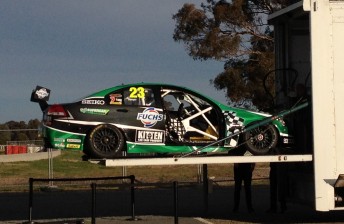 The Minda Motorsport-run Shannons Supercar Showdown Holden has wrapped up its final test day before making a second annual appearance as a wildcard entrant in the Supercheap Auto Bathurst 1000.

Although the winner of the Shannons Supercar Showdown reality television show has already been decided, all three contestants – Jesse Dixon, Andre Heimgartner and Glen Wood – that remain in the show after the most recently aired episode drove the car today.

The winner of the program will join Network Seven personality Grant Denyer in the driver’s seat at Bathurst.

Denyer was unable to make it to the test today, and is now not expected to taste the Lucas Dumbrell Motorsport-owned, Walkinshaw Racing-built, chassis until first practice at Bathurst. The Shannons entry in its garage at Winton

The Melbourne-based Minda Motorsport is preparing the Shannons Supercar Showdown entry for the first time this year after series creators Kelly Racing ran it in-house in 2011.

The final episode of the 2012 series is scheduled to air on September 22nd ahead of the Bathurst race on October 7th.

In addition to the Winton running, Queensland Raceway saw plenty of V8 Supercars action today with championship squads TeamVodafone, Stone Brothers Racing, Tekno Autosports and Dick Johnson Racing all taking the opportunity to give their respective co-drivers miles ahead of the upcoming endurance races.