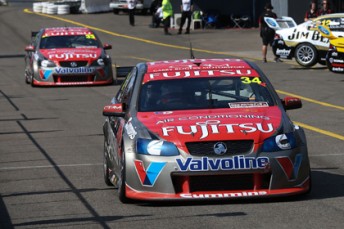 The GRM duo of Michael Caruso and Alexandre Premat

The Endurance Countdown is back – the third edition of Speedcafe.com’s video presentations published in the lead-up to the V8 Supercars endurance races at Sandown and Bathurst.

And this year, the Endurance Countdown will give you a chance to win a very rare piece of V8 Supercars hardware.

The 2012 Crimsafe Endurance Countdowns will run for 12 consecutive days, looking at each V8 Supercars organisation and their chances of victory in the two-driver V8 races – in particular, the famous Bathurst 1000.

With Caruso currently 14th in the V8 Supercars Championship, winning Bathurst is not an expectation that many will hold for this team at the endurance races. Can the Victorian Holden team turn it around?

See below for Episode 1 of the Crimsafe Endurance Countdown.