Paul Morris set to switch to Ford for Dunlop Series

Paul Morris set to switch to Ford for Dunlop Series 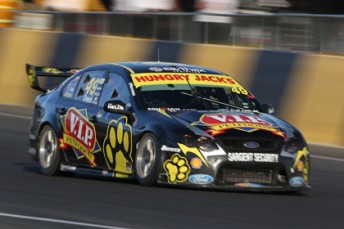 Gold Coaster Paul Morris will switch to Ford for a full tilt on the Dunlop Series next year.

Having been loyal to the Holden product, Morris will make his debut V8 race in a Ford Falcon in the Dick Smith Sandown 500 alongside Steve Owen in two weeks.

At the end of the year, Morris plans to use the #49 VIP Petfoods Falcon in a full Dunlop Series campaign.

Since retiring as a full-time V8 Supercars driver at the end of 2007, Morris has contested selected events of the Dunlop Series. Having done the majority of those races in his Commodore chassis codenamed ‘Kulwicki,’ Morris is looking forward to getting behind the wheel of some current specification equipment.

“Yeah, it will be the first time I’ve raced a Ford,” Morris told Speedcafe.com.

“The Falcon has a lot of development on it, compared to Kulwicki, which we haven’t done much to in two or three years.

“We have the play book with #49 as well, so we should be able to roll it off the truck and give it a good shake.”

Morris says he intends to compete in the entire 2013 Dunlop Series, and sees no reason why he could not compete for the title.

“There’s no reason why we can’t (contend for the title),” he said.

“I might have to change my mind set. I’d need to points race, but I think that could be achievable.

“Car of the Future will make the Dunlop Series a much more even playing field.”