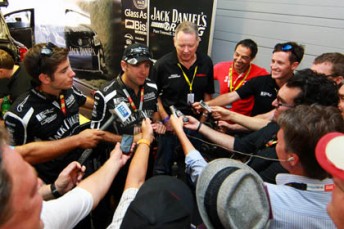 Nissan Australia has made a key move in its motorsports program, installing Jeff Fisher in the position of General Manager, Motorsport.

Fisher assumes the newly-created role as the Japanese car giant prepares for its introduction into the V8 Supercars Championship in 2013.

The former head of Nissan’s corporate communications, Fisher says that the move into the motorsport-only role will allow him to focus on the implementation of the make’s return to Australian motor racing.

“I’ve been on the V8 Supercars program for quite a while, and they’ve decided to put someone into the position full time,” Fisher told Speedcafe.com.

“This role gets me to focus entirely on the V8 Supercars/Altima program and make sure it becomes a mainstream part of Nissan’s business.

“I need to make sure its successful, make sure the budget stays in tact and make sure Nissan gets value from it. It needed someone to do that and I’m pretty happy it’s me.”

Fisher’s role at GM of Motorsport will see him direct all facets of Nissan’s national motorsport program, including press and PR.

Peter Fadeyev will take over from Fisher’s previous role. Fadeyev will also continue his current duties with Infiniti Cars.

Fadeyev will be supported in his role by Press and PR Supervisor Chris Jordan who joined Nissan in April.