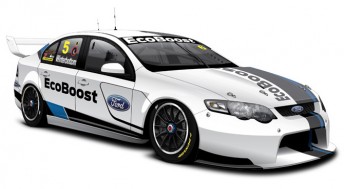 FPR revealed the look of its Car of the Future Falcon recently. It will hit the track for the first time on Monday

Ford Performance Racing will become the first Ford V8 Supercars team to track test its Car of the Future Falcon.

The factory Ford team will hit the track on this Monday morning (September 3), conducting a short five lap shakedown before completing the rest of its allocated 20 lap shakedown on Tuesday.

FPR has split its shakedown for TV considerations, with Network Seven appearing at the circuit on Monday to film the initial running.

While Triple Eight beat FPR to being the first to roll out its first COTF machine, the Falcon will be the first full-specification COTF car, complete with all of the available technical regulations and control components, including the new fuel cell.

The first proper test for FPR’s COTF Falcon is slated for September 10. The team’s second test will be held at Eastern Creek on October 15, amongst all of the key COTF car building teams. CLICK HERE for Speedcafe.com’s previous story.

Tuesday will see the Holden Racing Team join the fray, along with FPR, BJR and TDR who have elected to conduct two-day programs.