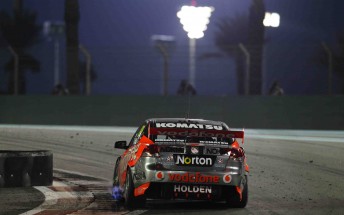 V8 Supercars have raced under lights, including at Abu Dhabi

Night time V8 Supercars races could be one of the major changes for the category in 2013 as part of a beefed up ‘prime-time’ TV broadcast deal.

Current broadcaster Seven, plus Nine and Ten have all signalling interest in securing the rights, with a five-year deal expected to fetch over $350 million (comparing favourably to its current six-year $168 million it receives from Seven).

The increased hype around V8 Supercars’ broadcast rights comes less than a week after NRL and Nine announced a landmark $1 billion package.

Industry insiders have tipped Nine as the favourite to secure the broadcast rights.

Tony Cochrane told Speedcafe.com recently that prime-time television time slots are a “prerequisite.” To accommodate that, up to four twilight or evening events could be held next year.

“What the NRL’s deal did underpin was that prime-time, free-to-air sport in Australia is a prerequisite for any network in the country,” Cochrane told Speedcafe.com.

“V8 Supercars is one of the four largest annual sports in the country by its television hours and by its viewership. Given that three of them (AFL, NRL and cricket) are now put to bed, and one isn’t, I think you’ll find that we’ll be occupying similar space to other sports.”

The concept was looked at for Queensland Raceway, and more recently the Clipsal 500 in Adelaide, however, the cost of erecting the lights and public areas were deemed too expensive.

While the Nine Network has never broadcast the Australian Touring Car Championship or the V8 Supercars, there are a couple of key figures in its overall management who could be influential to the rights falling their way.

Managing Director Jeffrey Browne has had long-term relationships in the sport and represented identities and teams through his previous law business Brown & Co. Browne is regarded as one of the smartest media and sporting legal brains in the country. He is also considered one of the real pioneers of sports law in Australia after starting working with the AFL in the mid 80s. He is also a non-executive director of carsales.com.au.

After leaving the army, Jones joined IMG in 1997 and headed up the company’s motorsport division, which included the role of CEO of the Gold Coast Indy event and the Bathurst 1000.

He moved on to corporate roles with the Foster’s Group and became National Sales Director before taking up an offer to join Ticketek.

Jones became a parter of former V8 Supercars co-owner Sports and Entertainment Limited (SEL) in 2010 and played an active advisory role in both the commercial and operations side of V8 Supercars and its events – at one stage he was considered a serious contender for the sport’s CEO role before moving into his current role at Nine Entertainment Co.

While the free-to-air networks are set to battle it out for the rights, Fox Sports will be brought into the equation, with its SPEED channel pushing to simulcast the action.

Digital rights are also up for grabs, with News Limited reporting that Telstra, Optus, Yahoo and Sportal have all held discussions with V8 Supercars for its online rights.