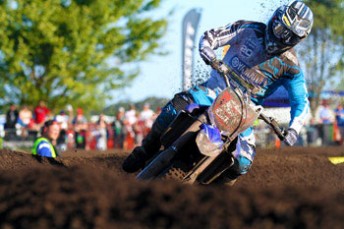 Josh Coppins walked away with the Australian MX1 Championship

Despite his international success, Kiwi rider Josh Coppins had never been crowned Australian MX Nationals Champion – however that has all changed with him taking out the premier MX1 Championship after the season finale at Coolum in Queensland.

Coppins finished the final round of the season in second place aboard his CDR Yamaha, which was enough to grant him the Championship. Todd Waters, who was crowned runner up in a Title sense finished the season on a high, the 21-year-old Gold Coaster winning the first and third motos. The only man to deny him was Coppins, who bookended his day with two second placings.

“I’m really happy for the team, its staff and all of the CDR Yamaha sponsors,” said Coppins. “Everybody has all been working really hard, so this is a rewarding result. It’s been a great series to be a part of, there is a lot of great teams and a lot of good kids coming up. This is a nice way to finish off my career.”

In MX2, Ford Dale held on to win the Championship in the narrowest of circumstances. Managing just fourth on the day, Dale crept over the line in a Championship sense by just two points.

The paddock held its collective breath for much of the day with front-runners Luke Styke and Josh Cacchia right at the point once again, particularly when Dale could manage just sixth in the opening moto of the day.

It was Cacchia that was able to win the round. With results mirroring those of MX1, he won the first and third motos. The only one he didn’t win – moto two – was taken out by Styke – who added to his pair of second placings. The long-time leader of the Championship was philosophical, but disappointed at the close of the Championship:

“I gave it my all today and did all that I could do,” Styke said. “The team has been unreal to me all year, so I have to carry the good result I got today into supercross. Hats off to Ford, he rode really well, but I just have to keep positive and keep training hard. The results will eventually come.”

When he found out he’d won the Championship, Dale was lost for words:

“I am totally overwhelmed. I have had my fair share of ups and downs but if feels so good to finally claim this title. It has been an incredible journey and I couldn’t have gotten here without the support of such an amazing team.”

South Aussie Kirk Gibbs was taken to hospital in a serious but stable condition after a major incident in the final moto MX2 of the day.

KTM’s Kane Lamont completed an outstanding weekend for the Kiwis, continuing to hold onto his points advantage in the Pirelli MX Development category, winning the Championship by some 21 points.

He finished the weekend with placings of third, first and sixth.

His Championship nemesis from 2012, Dylan Long had to contend with second in the Championship despite winning the round. Long finished the weekend with firsts in motos one and three and fourth in moto two.

Lamont was second in the event with Yamaha rider Sam Martin completing the round podium.

Coming home third in the Championship for the Under-19’s was Axis Motorsports Kawasaki rider Dylan Leary.

In the KTM Two Stroke Nationals, a special addition to the grand final weekend, West Aussie Dean Porter took the win from Brock Winston and another West Aussie in Keiron Hall.