Childress grandsons both expected to make Cup starts in 2013

Childress grandsons both expected to make Cup starts in 2013 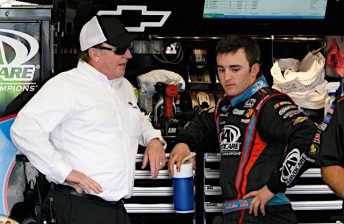 NASCAR Hall of Famer Richard Childress says he expects his grandsons Austin and Ty Dillon to both make appearances in the Sprint Cup field with his team next season.

The pair currently race Richard Childress Racing Chevrolets in the Nationwide and Camping World Truck Series respectively, with Austin fourth in the former series and Ty third in the latter.

The 22-year-old Austin has already competed in a fourth RCR Cup entry at Kansas in 2011 and Michigan last June, finishing 24th on both occasions, while Ty has a pair of Nationwide starts under his belt.

“He’ll run a full Nationwide program for another year to try and improve there as well. He’s getting better and better every time he races.

“He was really fast last time he ran in the Cup series in Michigan and adding the part-time schedule next year is all about getting more experience for him for the future.

“We’re looking to run Ty maybe in one (Cup race) as well, alongside some Nationwide races. He’s really doing a great job in the Trucks after winning the ARCA Series last season.” With both drivers currently running the #3 made famous by the late RCR driver Dale Earnhardt Sr, it is expected that Austin will eventually return the number to Cup while Ty is likely to revert to the #41 under which he has previously competed.

The Nationwide and Truck programs have been a shining light for RCR this year as the Kevin Harvick, Paul Menard and Jeff Burton-driven Sprint Cup cars endure a season-long victory drought.

According to Childress, the team’s general lack of competitiveness this year is simply a part of the category’s cycle.

“In our sport every operation or team has up years and down years, and we’re just not having a year to our expectations,” he said.

“We had a good year last year and won six races, but we just haven’t had it this year. We’re working on a lot of new stuff right now so hopefully we can get it turned around.”

He added of the squad’s 2013 line-up: “As far as I know right now we plan on having the same drivers in the same cars. That could change but right now that’s our plan.”

CLICK HERE for Speedcafe.com’s earlier story on Burton’s desire to remain with the team

Childress also dismissed suggestions that the team’s increased Nationwide and Truck efforts this year have taken focus away from its main program.

“Each one of them is their own separate business and separate operation,” he said.

“It doesn’t have any direct bearing, but if anything that Cup program can learn from the Nationwide side of it. Essentially that’s why we run in Nationwide.”

The NASCAR Sprint Cup, Nationwide and Camping World Truck series all continue this weekend in Atlanta.