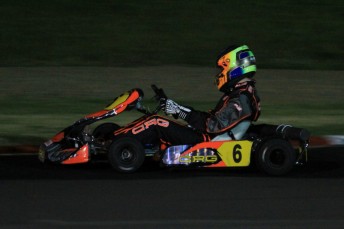 Tyler Greenbury on his way to victory in the Yamaha Karting Showdown at Eastern Creek on Saturday night (Pic: Quick Pixels Photography)

As the race heated up towards the end of the 20-lap journey, Lehane was sidelined by a mechanical failure while Kris Walton had charged his way from 30th position on the grid to be in contention for the win.

The final few laps were some of the most intense ever seen at the venue with the top seven drivers regularly swapping positions.

After numerous lead changes, it was Greenbury who emerged as the victor to claim the $2,000 winners cheque. Walton completed the Queensland quinella by claiming the $1,000 runner-up prize while Borg finished third ahead of Hryniuk and Australia’s Matthew Waters.

“That was probably the best race I’ve ever been a part of,” said Greenbury.

“It was close there up the front and we were all racing pretty hard. To be able to get the win for the CRG team is great in my first Clubman event with them. Tonight was literally the first time I’d driven the kart.”

Such was the intensity of the battle at the front, Ben Stewart went from second to seventh in one corner with two laps remaining. Nick Agland was unlucky not to feature significantly in the final standings after an opening lap incident dropped the front row starter to dead last in the 32 kart field, he recovered to finish 10th. 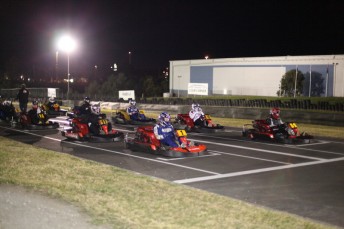 Just as hotly contested as the regular karting categories was the battle in the V8 Team/Media Challenge. Fifteen drivers lined up representing a variety of teams and media outlets with Paul Morris leading home V8 Team Owner Charlie Schwerkolt for the victory. Schwerkolt took the battle right up to Morris, even giving him a ‘hurry up’ on a few occasions, but in the end Morris’ experience prevailed.

Speedcafe.com’s Grant Rowley believed he was hampered by a mechanical gremlin throughout the evening masking his outright speed. As a result he finished eighth in the highly competitive 16-driver field.