Marcos Ambrose expecting to stay at RPM for 2013

Marcos Ambrose expecting to stay at RPM for 2013 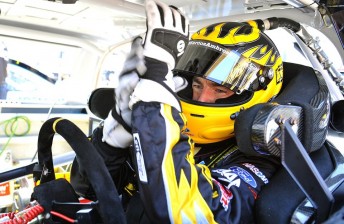 Marcos Ambrose looks set to stay at Richard Petty Motorsports next season as the team draws closer to securing a new deal with Ford.

The former two-time V8 Supercars Champion’s two-year contract with RPM ends at the conclusion of 2012, with the long-time Ford driver’s future thrown into question in recent months by a rumoured link between the squad and Dodge for next season.

With Dodge having subsequently confirmed that it will pull out of the category entirely, the path has been largely cleared for a new Ambrose-RPM deal to be finalised.

“We’re currently going through the process (of formulating a new contract) and I’d like to continue with RPM, I’ve got unfinished business here no doubt,” Ambrose told Speedcafe.com at Bristol.

“The Ford thing is very important to me. I wouldn’t be here without Ford and I worked very hard to get back into the Ford camp. I have a lot of friends in Ford Racing and I’ve got a lot of loyalty towards them.

“Our major sponsors are committed for next season and happy for me to continue to be their driver, so I can’t see why it wouldn’t play out.”

Ford’s North American motorsport manager, Jamie Allison, confirmed to Speedcafe.com that the company continues to work with RPM on an agreement that would see Ambrose continue to race with Ford backing.

“RPM is a Ford team – they’re stocked with a Ford champion in Marcos Ambrose and are well aligned with another Ford team (Roush Fenway) and engine program (Roush Yates),” Allison told Speedcafe.com.

“The landscape that RPM operates is fully 100 percent Ford, so we are working through with RPM to find a way for them to be part of the Ford team going forward.”

He added of Ambrose: “Inside Ford we refer to the ‘Ford family’, which extends to our drivers and our teams.

“Marcos is a Ford champion, even though he did stray for a little bit, unwillingly (when JTG Daugherty Racing switched from Ford to Toyota in 2009), he bleeds Ford blue and his heart is filled with Ford, so ideally he will always be part of a Ford team,” said Allison.

“Our plan is to work with RPM to make sure he continues to be part of the team next year as part of Ford.”

Ambrose heads into the IRWIN Tools Night Race at Bristol Motor Speedway 17th in points having scored seven top 10 finishes – including a second consecutive win at Watkins Glen – from the opening 23 races.

Although unhappy with his position, the now North Carolina-based Tasmanian says that scoring a wildcard spot in the Chase (which will likely require a second victory before the Chase starts in four races time) would make the year a success.

“We’ve missed a lot of opportunities, but we’ve got a little bit of room before the end of the season to make it an ‘A year’.

“We’re still a chance to make the Chase, and if we can do that it’d certainly turn our season around.

“I feel that we’re still moving forward. I’m not happy with 17th in the points, but we’re only 40 out of a Chase spot, and with the calibre of teams and drivers that we’re up against.

“Seventeenth is not ridiculous or terrible considering the rough season we’ve had. We’ve tripped over ourselves more than once with engine failures, part failures, bad strategies, bad driving and all that stuff.”

Ambrose will start tonight’s IRWIN Tools Night Race at Bristol from ninth position after rain before qualifying ensured the starting line-up would be decided on practice times.