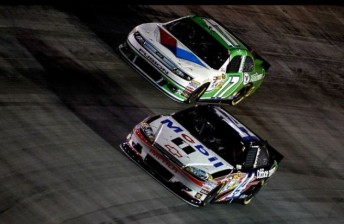 Stewart and Kenseth battle immediately prior to the incident

Roush Fenway Racing’s Matt Kenseth has brushed off the helmet tossing antics of a furious Tony Stewart following a clash between the pair during the IRWIN Tools Night Race at Bristol Motor Speedway.

The two former Sprint Cup series champions had been battling for the lead of the prestigious event when they made side-to-side contact exiting Turn 4 on Lap 335 of 500. Both cars subsequently spun to the inside of the track along the main straight where they collided with the wall.

What followed grabbed the biggest roar from the near 160,000 strong crowd however as Stewart flung his helmet at the #17 Ford as it completed its next lap.

Kenseth, who has also endured contact with Stewart at Infineon and Indianapolis earlier this season, added that he was “confused” by the on-track incident itself.

“I was running the top (lane) leading and he got a run and he went into Turn 1 like I wasn’t there and just went straight to the fence,” he said.

Kenseth went on to clinch a spot in the Chase by completing the race in 25th position. Stewart was just two places further back, albeit a further 15 laps in arrears.

Stewart has slipped to 10th in points following the race but can still remain confident of at least scoring a wildcard Chase entry on the account of his three victories from earlier in the year.

See below for video of the incident.