Burton: My NASCAR career will not end like this

Burton: My NASCAR career will not end like this 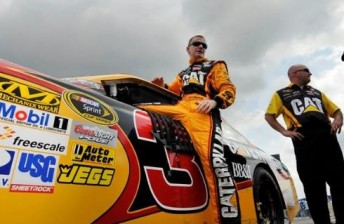 NASCAR veteran Jeff Burton says there is “no way” he will bow out of the Sprint Cup series off the back of consecutive dismal seasons with Richard Childress Racing.

Burton holds a contract with RCR for 2013, and says he expects to continue with the squad for a ninth successive season despite recent rumours linking both Kurt Busch and Richard Childress’ Nationwide Series contending grandson Austin Dillon to the #31 Chevrolet.

“I’m not going to end my career like this, there’s no way I’m going to bow out of this sport running the way I’m running right now,” Burton told Speedcafe.com at Bristol.

“It hasn’t been easy for us this year running like we have and rumours are always going to get started based on that, it’s just the way the sport is. If you don’t want to live with that you don’t do it.

“Everybody involved is frustrated and unhappy, but so they should be. If anybody is happy with this, they’re doing the wrong thing.”

Underlining the continued strength of his relationship with Childress, the 45-year-old Burton also says that he and the team remain motivated to bounce back from their current slump.

“I don’t think motivation is an issue for anybody in the team, including myself,” said Burton.

“If you want it and desire it like I do, it’s not an issue. But it’s about channeling the energy in the right direction, using that anger and frustration to find where we need to be. Frustration can get to you and effect your decisions, but it boils down to the fact that you’ve got to find a way forward.

“The whole situation is exceptionally frustrating but I knew it would be hard when I took this endeavour on. When I started racing I didn’t expect to have an easy job, and I certainly didn’t get one. I’m not in any situation I didn’t want to be in.”

With fellow RCR drivers Kevin Harvick and Paul Menard currently sitting eight and in points respectively, Burton does not see the apparent lack of direction within the team as negative.

“It’s easier to pull in the same direction when you’re running better, and the way we’ve been running you tend to have teams all trying something different,” he said.

“We have to be out looking and trying different stuff. The team likes to work together, but sometimes it’s not in your best interest to do so.”

Burton will start tonight’s IRWIN Tools Night Race from sixth position based on his speed in first practice after the Friday evening qualifying session was cancelled due to rain.