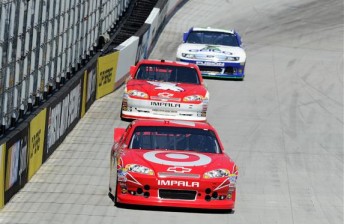 Mears, behind Juan Pablo Montoya and Kurt Busch during practice at Bristol

After two sun-bathed practice sessions, rain began to fall less than an hour before qualifying was due to start. While NASCAR’s jet dryers were soon on the circuit, conditions subsequently worsened, leaving the venue soaked.

The session was cancelled after 90 minutes of waiting, with Mears awarded the pole based on his fastest time from the first of today’s two practice sessions.

“It’s exciting for us – I think it’s gonna be good,” said Mears.

“Obviously, starting up front at Bristol period is always a good thing. Like I said, I think it’s exciting for our team to be able to have this opportunity to have the first pit selection starting up towards the front.

“It gives us a big head start from where we’ve been in the past.”

Brad Keselowski will share the front row with Mears while Greg Biffle and Joey Logano set to start on row two.

Australia’s Marcos Ambrose will start from ninth, while Danica Patrick took the 43rd and final spot on the grid.