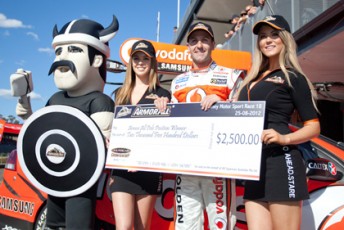 Tekno Autosport’s Webb looked set for his maiden pole in the dying stage before the TeamVodafone championship leader pipped Webb by 0.01s.

Whincup’s pole time ahead of this afternoon’s Race 18 was more than a second faster that Mark Skaife’s previous qualifying lap record of 1m30.6556s.

The opening 15 minutes of the 20 minute session saw teams roll around on old hard tyres, with Michael Patrizi and David Wall leading the pack. Teams launched into their fast laps with five minutes remaining, with all bar three cars in the 28 car field setting times under Skaife’s 13-year-old qualifying benchmark.

Ford Performance Racing’s Will Davison will start third, but will rue an off track moment at the final corner of his fast lap, potentially costing his pole.

Wall produced one of his season best qualifying efforts and will start 19th.

IRWIN Racing’s Lee Holdsworth will start a disappointing 25th after failing to get a new tyre gain.