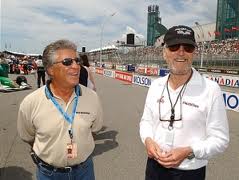 It became one of America’s most famous racing teams but never in their wildest dreams did actor Paul Newman and cigar chomping entrepreneur Carl Haas believe the level of success their partnership would deliver.

In late 1982 Newman and Haas founded their eponymous team and the following year it began competing in the CART championship.

Australian fans would come to know the enterprise, which used a factory in Lincolnshire,Illinois as its base, a lot more intimately when CART first ran a race on the streets of Surfers Paradise in 1991.

While John Andretti won that maiden CART race in Australia for Jim Hall’s VDS team it did not take long for Newman-Haas to find success in Australia’s tourist playground.

In 1993 Newman-Haas managed to pull off one of motor racing’s great coups when they signed Nigel Mansell fresh from delivering his crushing win in the previous year’s F1 World Championship.

Mansell mania hit Surfers Paradise like a tidal wave with thousands of expat Brits cramming the track, faces and bodies squashed against barriers craning for a look, an autograph, a chat with their Nige.

Surfers Paradise was the opening race of the season and the world’s motor racing press arrived in droves – a large contingent being specialist F1 journalists who were keen to see how a grand prix champion would stack up in a new environment of less technically adept IndyCars. 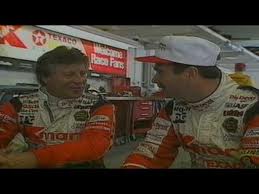 Mansell had taken the seat of Michael Andretti who switched to what would be a less than successful and short-lived career in F1 with McLaren while the Briton’s team-mate was Michael’s dad, the incomparable Mario Andretti.

Newman-Haas put up an impenetrable barrier around Mansell for the duration of the event with the team’s no bulls..t PR Michael Knight effectively blocking anyone without a “secret service” level clearance from speaking with Mansell let alone interviewing him.

Qualifying day arrived and signalled Mansell’s moment of truth and he stunned many experienced Indy and F1 racing identities by putting his Ford Cosworth-powered Lola on pole on debut in a masterful transformation to these heavy yet blindingly quick Indy machines.

The next day Mansell prevented the great Emerson Fittipaldi from winning back-to-back Gold Coast Indy races by storming to a victory and thus becoming the first “rookie” (of sorts) to clinch pole and win on debut.
That was the beginning of a wonderful era of success in Queensland by the Newman-Haas outfit who would go on to be the most successful team in the history of the Australian race.

Two years later Newman-Haas picked up Team Penske cast-off Paul Tracy and he would duly win the 1995 edition of the GC race.

The team would extend its winning ways on the streets of Surfers Paradise to a record six triumphs with its other wins achieved by Cristiano da Matta (2001), a huge favourite of Paul Newman, Bruno Junqueira (2004) and Sebastien Bourdais (2005 and 2007).

In 2007 Frenchman Bourdais’ win was the 104th for the team which had revised its name to Newman/Haas/Lanigan with new partner Mike Lanigan coming on board. 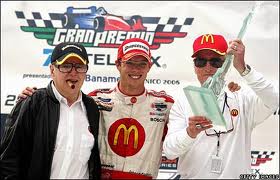 Remarkably Newman-Haas drivers managed to record seven pole positions in their 17 years of competing on the Gold Coast with Michael Andretti landing top spot in the first running of the race in 1991 and repeating that effort in 1995.

Newman-Haas had defiantly refused like other teams in preceding years such as Penske and Ganassi, which initially resisted, to cross to the rival Indy Racing League.

Newman himself was staunchly opposed to the IRL and believed its ambitions were driven chiefly by greed because that group held the sport’s jewel-in-the-crown the Indianapolis 500.

However Newman-Haas did field an entry a few times in the Indy 500, the only Champ Car team to do so in the final years of Champ Car’s existence.

Champ Car would ultimately fold and the one and only IRL race to be staged on the Gold Coast occurred in 2008. 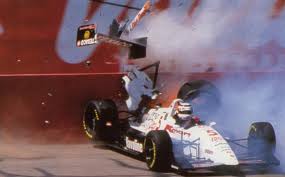 Nigel Mansell crashing at Phoenix in 1993

The team had been loyal to the Champ Car cause to the end but it had no option to ultimately conform when the two sides – CART and the IRL – merged in 2008.

Newman-Haas was now falling on lean times and was feeling the pinch financially as the GFC sunk its fangs into corporate America.

Indeed it suffered its cruellest loss when Paul Newman, the brilliant actor and philanthropist
died in September 2008.

The loss of Newman sadly reflected the status of the most successful team in CART/Champ Car history which was, too, coming to the end of days.

Up until 2007 Newman-Haas had been the beacon of stability and success in America’s top open wheel category where it was enlivened with bluechip sponsors and some of the greatest single-seater exponents in history.

People stayed with the team for many years, happy in the service of a squad that was led from the top the right way.

People like John Tzouanakis were happy to devote a large portion of their career to Newman-Haas. He was team manager for more than 25 years. Brian Lisles was the general manager for 19 while Kenny Siwieck was the assistant team manager for the same period. 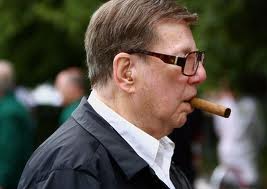 The team’s crew chief Kevin Chambers was with the Illinois squad for 15 years while Pero Campuzano (Bourdais) held down his role as chief mechanic for 13 years.

Over the years the who’s who list of celebrities had been wined and dined under the Newman-Haas annex at racetracks around America.

But those heady days would become a fading memory.

One of the greatest motor racing teams in America’s history was nearing the end of the road.

Last year Carl Haas announced the that team would no longer continue and sadly a great chapter in open wheel racing was closed.

It may never have won an Indy 500 but the team finished with the incredible record of 107 wins and 109 pole positions over 29 years.

And this richly decorated team that has created so many stories over the years closed its doors with a succinct statement by Haas, the man who would trawl the paddock chomping on an unlit cigar and who would bless his cars before each race.

“The economic climate no longer enables Newman-Haas Racing to participate in open-wheel racing at this time,” he said.

Thanks for the memories Newman-Haas Racing.