A strong field of 32 Touring Car Masters machines will compete in Round 5 of the popular series, headlining the Muscle Car Masters program at Sydney Motorsport Park on the Fathers Day weekend (September 1-2).

The field will be bolstered by the appearance of three debutants – Adam Bressington, Jason Gomersall and Peter O’Donnell.

Bressington will take the wheel of the Steve Mason Camaro that won the 2007 series title. The car has recently undergone an extensive rebuild. 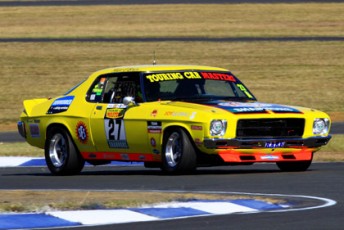 Gomersall will have the challenge of a brand-new car, driving the category’s second Torana SL/R 5000.

Returning to the series will be Doug Westwood, who has rebuilt his GTHO Falcon after its fiery exit at the Clipsal 500 meeting.

The Muscle Car Masters meeting will be held on the new, full length Sydney Motorsport Park track. Only three of the 32 entrants have experienced the revised track layout, including title leader John Bowe, Brad Tilley and Greg Keene.

Keene says that the new tight and twisty part of the track will favour the nibble cars.

“The track has had an exciting addition, and it’s unlike anything else with the series of tight undulating turns and the uphill hairpin,” he said.

“It’s likely going to favour the nimble Porsches which is great for the action across the category.

“It’s always full on in this series, and now trying to pass on the tight and very technically challenging track is going to be even harder, needing more focus and everyone to stay on their toes to make the moves cleanly.

“It’s definitely going to make for great racing and I think the spectators will enjoy it as much as we will from the cars.”