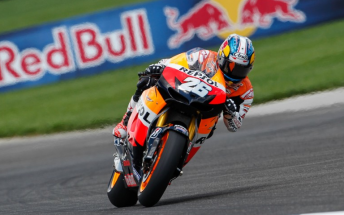 Australian Casey Stoner qualified sixth, but suffered a monstrous highside early in the session. The incident is suspected to have resulted in torn ligament in his right ankle and is undergoing further checks at the Indianapolis Methodist Hospital to confirm his injury and determine his race fitness for tomorrow.

Another serious incident befell Ducati Team’s Nicky Hayden, who was viciously thrown off his bike in the same bend as Stoner (Turn 13). The crash briefly rendered the American unconscious, but was spared any serious injuries. He was also be taken to hospital for further assessment and has been ruled out of the race.

Yamaha’s Ben Spies also crashed at Turn 13, but was able to walk away from the incident.

Pedrosa broke the lap record with a high 1m38s, relegating Yamaha Factory Racing’s Jorge Lorenzo into second on the grid, after he had struggled with his bike in the preceding sessions.

Ducati’s Valentino Rossi could only manage 11th place, after suffering a scare in Turn 13 with his bike, causing him to abort his fast lap.

Pramac Racing Team’s Héctor Barberá, who has been replaced by Toni Elías after fracturing three vertebrae in his back, is currently on his way back to Barcelona for further medical assessments.

Here is the Foxsports News report on the crashes from qualifying