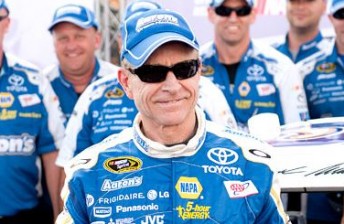 Martin lapped the two-mile venue at an average of 199.71mph to be more than a full mph (0.20s) faster than Roush Fenway’s Carl Edwards.

Ambrose scored pole for Michigan’s June race with a 203.24mph average lap, and rates the circuit as his best chance to propel himself into Chase contention with victory.

Ambrose’s RPM team-mate Aric Almirola failed to set a time in qualifying after finding the wall on his lap.

A more commendable performance was put in by Parker Kligerman, who recorded the 17th quickest time while substituting for Sam Hornish. The latter had elected to take part in qualifying for the Nationwide race at Montreal, where he will start second.

Australian Owen Kelly put Kyle Busch’s Toyota fifth on the grid in the car-owner’s absence. Kelly had been fourth and 12th fastest in the two earlier practice sessions, and could race the car if Busch’s travel plans back from Michigan do not run to schedule.

See below for the full Michigan qualifying result