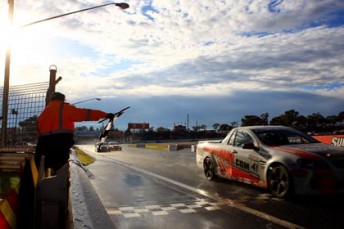 Gary MacDonald crosses the line to win at Bathurst in 2009

Gary MacDonald and Sean Carter will make a return to the V8 Ute field for Round 5 of the Auto One V8 Ute Racing Series – protected by Armor All, at Mount Panorama in October.

MacDonald, who was the round winner on the 2009 Bathurst V8 Ute race, has been in and out of the series over the past 12 years, will drive a brand-new Ford FG, prepared by Sieders Racing. He is looking forward to getting back into the fray at Mount Panorama.

“I’m really excited, I haven’t been to Bathurst for a few years, I only did Sydney last year as a one off, due to the birth of our new baby boy,” MacDonald said.

“I’m hoping to do at least one test, hopefully two. Sieders Racing is preparing the Ute, but I think I’ll be a bit rusty going up against the championship contenders.

“I’ve done enough in the past to know you really have to hang it out there at Bathurst, you just have to give it all and man-up, let’s hope lightning strikes.”

Like MacDonald, Carter’s last V8 Utes race was at Sydney last year. He will compete with Williams Race Tech and is hoping for a strong result.

“I’m really looking forward to being back in a Ute again. I had a test day at Winton recently and I felt a lot more comfortable in the car with the new DMS suspension package and our lap times showed it,” said Carter, who will be backed by Sucker Punch Energy Drinks.

“I’ve never really had a chance to settle into the series but I think I showed glimpses of what I’m capable of at Sandown last year with an eighth place for the round, so I’m really hoping for a consistent run where I can build some confidence and produce the results that I know I’m capable of.”

The V8 Utes will be a support class for the Supercheap Auto Bathurst 1000, to be held on October 4-7.