It was not long before Howman was tragically killed while competing at Rowley Park in Adelaide in January 1959, that Goode mobilised a group of people to build a safety fence at Redcliffe.

“We had to build a safety fence so Norm Thurecht who was a Speedway follower and who had a timber mill at Redcliffe and another chap who was a fruiterer supplied us with trucks so we could cart the timber to the Showgrounds,” Goode recalled.

“Our families chipped in and there would be 60 of us every Sunday working down at Redcliffe building the fence.”

“We didn’t know when we were going to run – day time, night time – but in the end we couldn’t run at night because we couldn’t afford to buy lights so we ran on Saturday afternoons.”

“So we ran under Steve Howman’s leadership until he was killed.”

“Then no-one wanted to take on the job of running Redcliffe so I ended up with it.”

“I was running the whole thing – writing up nominations, writing the programmes and taking it down to the Redcliffe paper so it would get printed.” 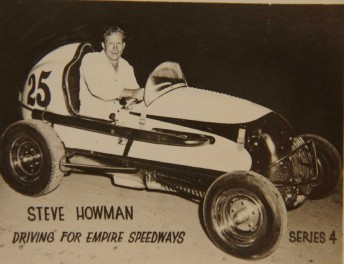 “I would get down there to the Showgrounds early on Saturdays and by this time we had lights and it was off-season to the Brisbane Exhibition Ground that only ran 24 shows a year.”

Goode remembers being approached by a Stock Car driver during that 1958-1959 season who was spruiking the virtues of a bunch of young lads who reckoned they could sing.

“This driver said to me one day, ‘listen I’ve got some young lads that live over the road to the Showgrounds at Redcliffe and they want to come and sing out of the back of a truck during the Speedway’.”

Goode pondered that it might be a prime opportunity to add a bit of extra entertainment during one of the meetings that featured the Stock Bikes.

“So I agreed and the boys were quickly escorted over the road from their home to the track.”

“I was in the pits lining up the second half of the programme for the first race and I heard them singing over the PA system.”

“I thought ‘shit’ these bloody kids are good. So I got their address and the next day I went to see them and when I got back home I rang Bill Gates who was an announcer at 4BH and he was a good mate of mine.”

This was the first time these young kids – Barry, Maurice, Robin and Andy Gibb – had come to the attention of people who had the right connections for them to become recognised by a record company. 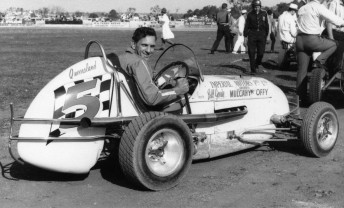 Bill Goode in his heyday

“I think everybody out there knows of the Bee Gees and that’s how things started to happen for them as kids.”

“Bill Gates thought they were terrific and he arranged a meeting with myself for a third time.”

“I remember Bill came to my house at Wavell Heights (northern Brisbane suburb) for dinner before we both went to Redcliffe to see the Gibb boys.”

“He (Bill Gates) said, ‘if you are going to put these blokes on contract what are we going to call them’?. I hadn’t really thought about that.”

“So he said ‘I’ve given it a fair bit of thought and he said seeing that your name is Bill Goode and I’m Bill Gates and the elder boy is Barry Gibb (all initials BG) why don’t we suggest we call them The Bee Gees.”

“So on that night we did and the boys agreed to it and by the end of that week I had brought down contracts for their parents to sign.”

Bill Goode, the speedway driver and accidental Redcliffe Speedway promoter, was about to enter the music business managing and promoting a bunch of young turks originally from the Isle Of Man who had settled in far away Brisbane.

“The contracts were management rights for 15 years and for 33.3 per cent of the take.” “So I was all set to do this and we sent recordings to every record company we could think of around the world.”

“Some wouldn’t answer. Some answered and said they are a bit young and underdone and they would contact us when they get a bit older.”

“Then around this time (1959/1960) we had an enormous credit squeeze. There was something like 17 per cent unemployment and I had a building company and it went to the wall because we couldn’t pay our bills.”

“At the same time Hugh Gibb, the father of the boys, was in my office every morning wanting to know whether there was any nibbles from record companies or any developments on getting a gig anywhere.”

“I remember thinking I just couldn’t handle it with the business in dire straights.”

“I had kids and a house that I’d mortgaged to the hilt to try to save my company and I’d just taken on a lease of a new Rambler car.”

It was in this predicament that Goode understandably made the decision to back away from handling this unknown pop group, the Bee Gees.

In this case, hindsight is the cruellest form perception a human can have.

“It would have been marvellous wouldn’t it’?,” Goode said, thinking of the fame and fortune that came the way of The Bee Gees.

“In the end I asked Bill Gates whether he would like to take over trying to get the kids up and front. He said, ‘I’m a radio announcer, not a businessman and I wouldn’t know how to go about it’.”

“The plan was that once we had got the boys up and running, a bloke from 4BH who was a salesman who I had put on the contract was going to travel around and get all the forward bookings etc.”

“But in the end I just said to Hugh Gibb, ‘look here’s the original of the contract. You look after them and that was the end of my involvement with The Bee Gees.”

These days Bill Goode lives in Brisbane and has been coerced into writing a book on his life story. It is currently a ‘work-in-progress’.

“I’ve always lived my life at 150mph and I’ve almost slowed down now to a dead stop,” the spritely 81-year-old said.

“I have just finished chapter one and I have a good title in mind – ‘An Angel On My Shoulder’.”