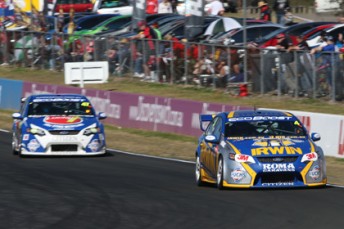 The privateer team will upgrade its equipment for next year, with its three drivers Drew Russell, Aaren Russell and Michael Hector set to campaign new machinery.

Two of the team’s cars will come from the current stock of SBR FG Falcons, while the purchase of a third car is yet to be finalised.

In a test day at Queensland Raceway in late May, the two Russell brothers sampled Scott McLaughlin’s SBR-built Falcon, and the team has since secured the money to make the step up.

“This is incredibly exciting news for the team; it’s a major boost looking ahead to the 2013 season,” said team owner Wayne Russell.

“We’re excited to continue with Drew, Aaren and Michael, and to have secured two Stone Brothers Racing Falcons at this early stage.

“Stone Brothers Racing are undoubtedly one of the top teams in pit lane. Their record speaks for itself and their FGs have proven to be fast, week-in, week-out.

“We really value the relationship we’ve been able to build with SBR in recent years through their engine program. They’ve been a great partner on that front and we’re looking forward to taking that to the next level in 2013.

“We’re currently working through the process of securing a third chassis, and look forward to announcing this in due course.”

The next round of the Dunlop Series will be held at Bathurst on October 4-6. After four rounds, Drew Russell sits 10th in the standings, with Aaren Russell 17th and first-year driver Michael Hector 21st in their Carrington Equipment Group and CEG Rentals-backed Falcons.