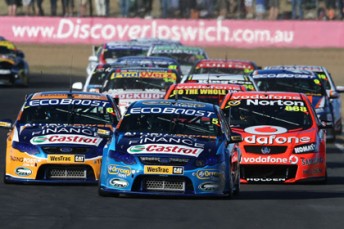 The V8 Supercars have ‘Discovered Ipswich.’ Where will they discover next?

V8 Supercars continues to work at increasing the number of international events on its calendar, with the Indonesian province of Bali the latest destination to be linked to the Australian championship.

According to a report from The Daily Telegraph, authorities in Bali have garnered funding for a permanent race track near its capital of Denpasar, which it hopes to have operational by 2014.

The track is said to be chasing events for both the V8 Supercars Championship and MotoGP World Championship in time for their respective 2015 seasons.

“The category has met with representatives from the proposed circuit,” said the source.

“They are building a track, which is about an hour away from Denpasar. They are looking at a large investment and have targeted V8 Supercars to be one of two major global racing categories to put the track on the map.

“Obviously V8s are very appealing as Australian’s are very important to their tourism market. It will help them push their message.”

The proposed Denpasar circuit would join the recently upgraded Sentul International Circuit as one of two locations in Indonesia licensed to run a V8 Supercars event.

The category has been chasing a race in South East Asian for some time, with the hosting of an FIA Asian Zone member at last year’s Armor All Gold Coast 600 fuelling widespread speculation of future locations.

CLICK HERE for the full The Daily Telegraph story